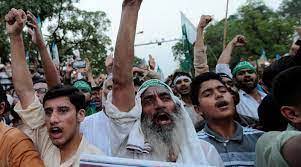 Muzaffarabad [PoK]: The recent move by Islamabad that seeks to transfer financial and legislative powers from the local government to the federal government of Pakistan has created widespread protest in Pakistan-occupied Kashmir (PoK).

PoK citizens are angry over the repeated attempts by the Islamabad government to divest the region of its special power and take complete control over the administration, reported Islam Khabar.

The Pakistan government’s plan is to bring in the 15th Constitutional Amendment that will transfer the financial and administrative powers of the local government to Islamabad.

There is a powerful undercurrent of discontent in the PoK region that is under Pakistan’s control.

Moreover, there has been an outcry that Islamabad does not take the people in PoK into confidence or consult them before taking big decisions for them, reported Islam Khabar.

PoK alleged that the Pakistan government wanted to strip them of their powers, which at present allows them to make laws according to their needs and collect taxes.

Islamabad proposal for an amendment to the constitution will cause the region to lose its status as a self-governing entity.

People and political parties in PoK have opposed the move, which has added to the distrust between the Kashmiris and the government.

Protests have broken in all 10 districts of the region. Protestors said the imperialistic policies of Islamabad want to coalesce PoK into being a part of Pakistan, reported Islam Khabar.

“Right from childhood, our children through social, educational, economic, and cultural mechanisms are brainwashed or educated on how to be a good slave of Pakistan,” said activist Shabir Choudhry while criticising Pakistan for trying to usurp PoK’s resources by means of the amendment.

Now people have questioned the amendment move by the federal government since they say it divested the region and PoK of their rights and freedom, reported Islam Khabar.

Protests were held across Kashmir on Pakistan’s Independence Day seeking freedom from Pakistan despite a harsh crackdown by security agencies.

Kashmiri people came to the street, shut the cities, and chanted slogans against Pakistan.

While major Pakistani news media did not cover the issue, social media was flooded with protest videos, reported Islam Khhabar.

A medical student named Shahid Latif Choudhary said, “We reject the 15th amendment. Kashmiri only want their right of self-determination. No compromise on our beloved state’s identity.”

Jammu and Kashmir Liberation Front president Mehtab Ahmed said that any attempt by Islamabad to change PoK’s status would have “severe” consequences.

There have been clashes between protestors and security agencies. Police have registered cases against over 400 people in Kashmir.

Kashmiris have been long-suspicious about Islamabad’s intentions to exploit vast reserves of natural resources the region has.

There have been repeated allegations that the Pakistan state exploits the rich forest, mining and water resources in PoK while Kashmiri people could not get any benefit.

Even locals are not consulted before natural resources from the region are explored and exploited by Pakistan. Now, Islamabad plans to establish a tourism authority in PoK, which will override the laws that are in force for forest protection, reported Islam Khabar.

Local Kashmiris are scared that their land now will be sold to foreign investors while they have no say over this.\