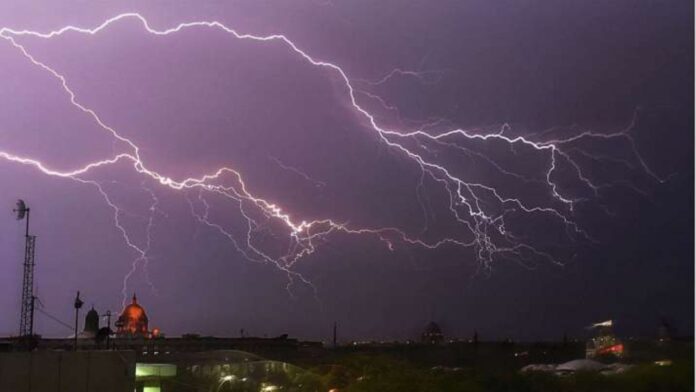 Patna (Bihar) [India]: Bihar Chief Minister Nitish Kumar on Sunday expressed grief over the death of 17 persons in lightning and thunderstorm and announced an ex-gratia of Rs 4 lakh for the family members of each of the victims.

Taking to the Twitter the Chief Minister said, “6 people died in Bhagalpur, 3 in Vaishali, 2 in Khagaria, 1 in Katihar, 1 in Saharsa, 1 in Madhepura, 2 in Banka and 1 in Munger due to thunderstorm and lightning. My deepest condolences to the affected families. An ex-gratia of Rs 4 lakh will be given immediately to the next of kin of all the deceased.” He also appealed to people to take full vigil in bad weather and follow the suggestions issued by the Disaster Management Department to prevent thunderstorms.

“There is an appeal to the people to take full vigil in bad weather and follow the suggestions issued by the Disaster Management Department from time to time to prevent thunderstorms. Stay at home and stay safe in bad weather,” he added.

Meanwhile, India Meteorological Department (IMD) on Sunday said that the southwest monsoon has further advanced into some more parts of the Gujarat region, Madhya Pradesh, remaining parts of Vidarbha, some more parts of Chhattisgarh, Gangetic West Bengal, Jharkhand and Bihar.

Thunderstorm activity accompanied by isolated heavy showers is likely to continue throughout North, Central and East India during the next two-three days.