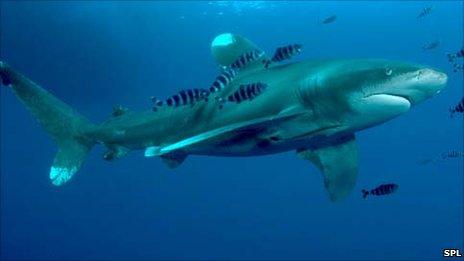 Cairo [Egypt]: Two women were killed after being attacked by a shark in the south of Egypt’s Red Sea resort city of Hurghada, the Egyptian Environment Ministry confirmed on Sunday.

“We offer our sincerest condolences to the families of the two victims,” said Egyptian Environment Minister Yasmine Fouad. “As soon as we received a report that two women were attacked by a shark while practicing surface swimming in the area facing Sahl Hasheesh resort, south of Hurghada, a working group was formed from specialists in the Red Sea reserves and the Hurghada Environmental Protection and Conservation Association (HEPCA),” said the statement.

The environment minister instructed the scientific committee formed to examine the situation to collect information from all sources and analyze them in accordance with the protocols used globally in investigating shark attacks on humans, it added.

Although the statement does not mention the nationalities of the victims and the timing of the accident, a video was circulated on Friday showing a woman struggling to swim back to shore after being attacked by a shark in Sahl Hasheesh resort near Hurghada.

Some media reports said the clip was about a 68-year-old Austrian woman, who lost a leg and an arm before she died shortly after arriving at a nearby hospital.

Following the accident, the Red Sea governorate issued an order on Friday to close several Red Sea beaches and suspend all sea sports and activities in the area.