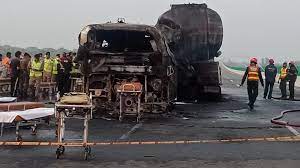 Islamabad [Pakistan]: At least 20 people were killed and six injured when a passenger bus collided with an oil tanker in Pakistan’s Sindh province, officials said.

The accident took place on the Multan-Sukkur Motorway (M-5) in the early hours of Tuesday, the Dawn newspaper reported.

The officials said the passenger bus, which was travelling from Lahore to Karachi, hit the oil tanker from the rear side at an interchange on the motorway. The collision between the two led to a fire and subsequent death of 20 people.

“At 4 am at motorway obarra junobi terrible accident happened between bus LES -1211- 09 and Oil TankerLDA/6. Bus that was moving from Lahore to Karachi hit oil Tanker from backside and fire erupted.06X persons got Injured and 20X died on the spot. On spot monitoring rescue process,” Multan Commissioner Amir Khattak confirmed the incident in a tweet.

The tanker was carrying thousands of litres of petrol and the apparent cause of the accident was the bus driver falling asleep.

Punjab Chief Minister Parvez Elahi has sought a report on the incident from the local officials. He stressed that all aspects of the incident should be investigated and those responsible be identified.

In a separate incident, eight people were killed and 32 others were injured when a passenger coaster turned turtle in Sindh on Tuesday.

The incident happened when the vehicle’s driver lost control over it while negotiating a sharp turn shortly before reaching the toll plaza in the Sukkur district of the province, the reports said.

The van fell into a ditch after going out of the driver’s control, which resulted in fatalities and serious injuries to the passengers. The wounded commuters were shifted to a nearby hospital.

The deceased included four women and two kids. They were on their way to Sindh’s capital city Karachi from the country’s north Swat district, the reports said.