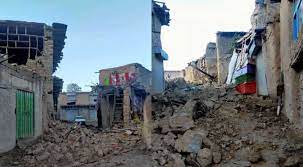 Kabul [Afghanistan]: An earthquake of magnitude 6.1 struck eastern Afghanistan on Wednesday leaving at least 255 people dead and over 500 injured in the provinces of Paktika and Khost.

The quake, with a magnitude of 6.1, jolted 44 km southwest of Khost, Afghanistan, according to the US Geological Survey (USGS), reported Xinhua.

The casualties occurred in four districts of Paktika province, the most-hit eastern province, according to the report, citing the latest local sources.

The quake with a magnitude of 6.1 has damaged dozens of houses in the region and also caused land sliding in Paktika, local sources said.

“According to preliminary information … 100 people have been killed in Paktika, Gayan district, and in Afghan Dubai village, in Spera district of Khost province, 20 people have been exhumed,” Naseri said, reported Sputnik.

Meanwhile, the European Mediterranean Seismological Centre (EMSC) said that the jolt was felt over a range of some 500 km by about 119 million people in Pakistan, Afghanistan and India.

Pakistan media reported a mild intensity earthquake struck Islamabad and other parts of the country.

“Massive EARTHQUAKE in Islamabad! Allah khair! I hope you’re all safe! Allah Taala protect us all. Amen,” said one of the Twitter users from Pakistan.

Tremors were also felt in Lahore, Multan, Quetta and several other areas of Pakistan.
The Namal reported that the earthquake was felt for a few seconds and sent people scurrying into the streets.

The shocks were also recorded in Faisalabad, Abbottabad, Swat, Buner, Kohat and Malakand, according to Geo News reported.

J-K: Thousands Queue Up For ‘Agnipath’ Recruitment Rally In Samba

Airtel Unveils Plan To Roll Out 5G Services In 8 Cities

US ‘Horrified’ By Mass Shooting Massacre In Thailand; Condemns Act