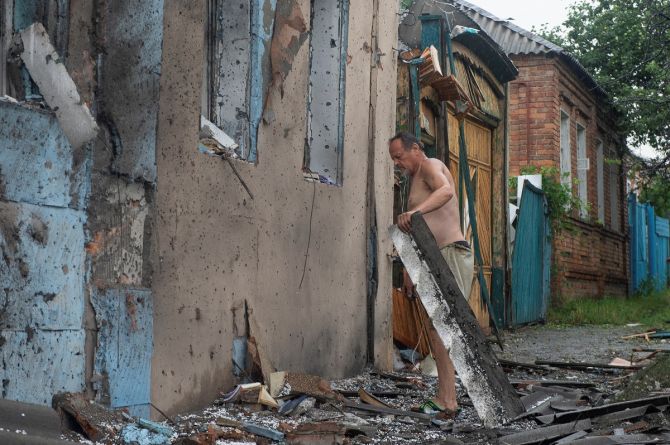 Kyiv [Ukraine]: At least 29 people were killed after a Russian strike hit an apartment block in the Donetsk region of eastern Ukraine, Ukrainian officials said Monday.

The residential building in the town of Chasiv Yar was hit on Saturday evening as Russia ramped up its assault on cities and towns in eastern Ukraine in an attempt to take control over the entire Donbas area, reported CNN. Twenty-four bodies have been pulled from the wreckage and a further five were visible but not retrievable, Ukraine’s State Emergency Service said Monday.

Emergency workers had rescued six people and established contact with two others who were still buried under the wreckage, the emergency service said.

“As of now around 72 per cent of the rubble has been cleared,” Pavlo Kyrylenko, the head of Donetsk regional military administration, told Ukrainian media Monday.

Over the weekend, Kyrylenko said the area was struck by two or three Russian rockets and that the incident was “yet another confirmation of the crimes of the Russian Federation, confirmation that they are shelling residential areas.”

Chasiv Yar and other towns in Donetsk have been under heavy fire in recent days as Russian forces try to grind down Ukrainian resistance in the area and move further west towards Kramatorsk and Sloviansk, reported CNN.

The Russian Defense Ministry claimed on Saturday that its troops destroyed a hangar with US-supplied M777 howitzers, long-range weapons, and dozens of Ukrainian “militants” near Chasiv Yar.

Meanwhile, both sides in the conflict have reported fighting north of Sloviansk in the Donetsk region.

Donetsk and Luhansk are the two regions that together form Donbas, the eastern part of Ukraine where the conflict between Ukraine and Russian-backed separatists started in 2014.

Russian troops have already taken over almost all of the Luhansk region, the head of Luhansk’s region military administration Serhiy Hayday said in a telegram post on Saturday, adding that some 300,000 people from the area have been forced to flee their homes.

Lysychansk, the last city that was still under Ukrainian control in Luhansk, fell to Russia last week.

Away from Donetsk, Russian attacks on the northeastern city of Kharkiv and its surrounding area have intensified, with shelling and tank fire hitting half-a-dozen settlements around the city on Monday, said the Ukrainian military, reported CNN.
At least six people were killed and 31 injured in Russian bombardment of three Kharkiv districts, according to Ukrainian officials.