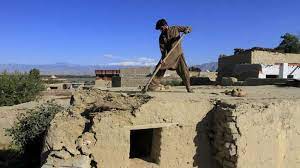 Fayzabad [Afghanistan]: An earthquake of magnitude 4.9 on the Richter scale hit Afghanistan’s Fayzabad in the wee hours of Thursday at around 00:38 am.

There have been no reports of casualties or loss of properties as of now.
More details are awaited.

Earlier, on June 22, a 5.9-magnitude earthquake jolted parts of Afghanistan including the capital city Kabul killing over 1,000 people across Barmal and Giyan districts in Paktika province and Spera district in Khost province.

The disaster comes as Afghanistan continues to struggle with a severe economic crisis since the Taliban took over, as US-led international forces withdrew following two decades of war.

In addition, at least 1,455 people were injured across three of the six most-affected districts of Barmal, Giyan, and Spera – many of them seriously. Over 10,000 houses were destroyed.

The United Nations allocated USD 10 million from the UN Central Emergency Response Funds (UNCERF) to support the people of Afghanistan affected by the earthquake that struck the eastern part of the country.

Royal Humanitarian Foundation (RHF) of Bahrain has entered into an agreement with the United Nations High Commissioner for Refugees (UNHCR) to distribute relief aid to support people in Afghanistan affected by the recent earthquake.

India had also handed over the consignments of relief assistance to support the Afghan nationals affected by the earthquake.

India also deployed a technical team to the Embassy in Kabul to coordinate the efforts of stakeholders for the delivery of humanitarian aid.