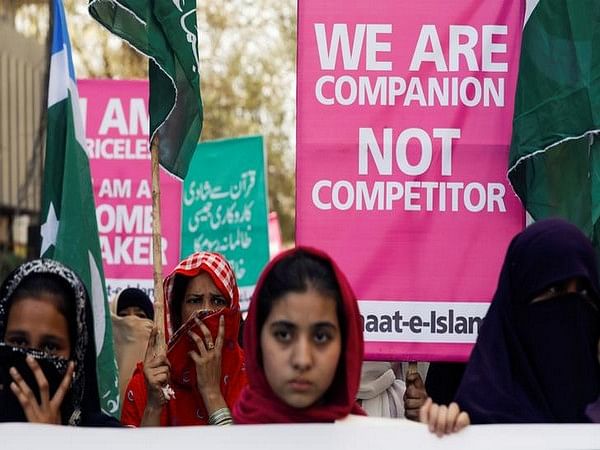 Karachi [Pakistan]: Pakistan political party Jamat-e-Islami (JI) Chief Hafiz Naeem-ur-Rehman has said that about four million women in Karachi, working in factories on a contract basis, are not given their due rights by their employers.

The JI official said that mothers, sisters and daughters of Karachi are deprived of basic amenities. While addressing a women’s convention in Karachi, he said that while seminars for women’s rights are held from time to time, nothing practical is achieved. He further expressed hope that Jamaat-e-Islami will stand high in local body elections and will have enough mandate. The JI Karachi leader said that when JI will be in power, women will be respected and their problems will be solved, reported The Express Tribune.

Highlighting Karachi’s worst condition in regards to women, Hafiz Naeemur Rehman said that JI was the only hope of 35 million people living in the city.

He said that mothers, sisters and daughters of Karachi are deprived of basic amenities. Karachi is running the entire country’s economy, but it is infested with the menace of corruption and looting un the hands of the few, he said while lamenting that the city also lacks an effective transportation system.

Meanwhile, street crimes in Karachi have risen to unprecedented levels amid poor governance by the provincial authorities.

As per the record shared by the authorities, a total of 1600 motorcycles were either snatched or stolen in the city during the holy month. In addition, over 1800 mobile phones and 121 four-wheelers were also stolen during Ramzan

According to the Karachi Police, seven citizens were killed while 43 others got injured during street crime incidents in the metropolitan. Several attempts have been made by the police to curb the incidents.

In its bid to address the law and order issue in Karachi, police are gearing up to put the suspects under electronic monitoring. The police prepared a draft law for e-tagging of street criminals with Additional IG Karachi Ghulam Nabi Memon, saying that 11,000 suspects will be placed under the radar.