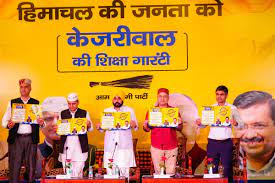 Shimla (Himachal Pradesh): Punjab Chief Minister Bhagwant Mann and Delhi Deputy Chief Minister Manish Sisodia on Wednesday announced five guarantees to the people of the state in the field of education which is slated to go to Assembly polls later this year.

“Kejriwal guarantees to provide good and free education to all the children of Himachal Pradesh. He guarantees that like Delhi’s government schools, all the government schools in Himachal will be made luxurious. He also guarantees that fees of private schools will not be allowed to increase unnecessarily. All temporary teachers of Himachal Pradesh will be made permanent and the vacant seats of teachers will be filled. Teachers will not be given any other work apart from teaching,” he said.

The AAP leader urged the BJP to not “make fun” by calling it “free ki revariya”.

“One request that I would like to make to the people of the Bhartiya Janta Party is that they are in power in the state and the country. Do not make fun of education by calling it ‘free ki revadiya’. For you, it could be ‘free ki revadi’, but for Arvind Kejriwal, it is guaranteed and for the common man, it is a guarantee of their kid’s brighter future. Please don’t make a mockery of it, he said.Share