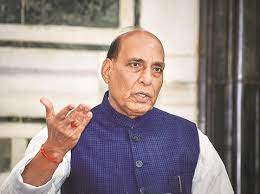 New Delhi [India]: Amid the raging protests over the Agnipath Scheme across the country, Union Defence Minister Rajnath Singh on Saturday held a meeting with the defence service chiefs in Delhi.

Navy Chief Admiral R Hari Kumar and IAF chief Air Chief Marshal Vivek Ram Chaudhari were present at the meeting in Defence Minister’s residence. The Ministry of Home Affairs on Saturday announced that ‘Agniveers’ will be absorbed into the Central Armed Police Forces (CAPFs) and Assam Rifles at the end of their four-year term in the army.

MHA also announced three years of age relaxation, beyond the upper age limit to Agniveers for recruitment in CAPFs and Assam Rifles.

For the first batch of Agniveers, age relaxation will be for 5 years beyond the upper age limit.

The decision comes amid the raging protests that have broken out across the country against the Centre’s Agnipath Scheme.

Agnipath allows patriotic and motivated youth to serve in the Armed Forces for a period of four years. The Agnipath Scheme has been designed to enable a youthful profile of the Armed Forces.

Meanwhile, the first batch of Agniveers will avail a further relaxation of 5 years beyond the upper age limit of 23, taking it to 28 years.