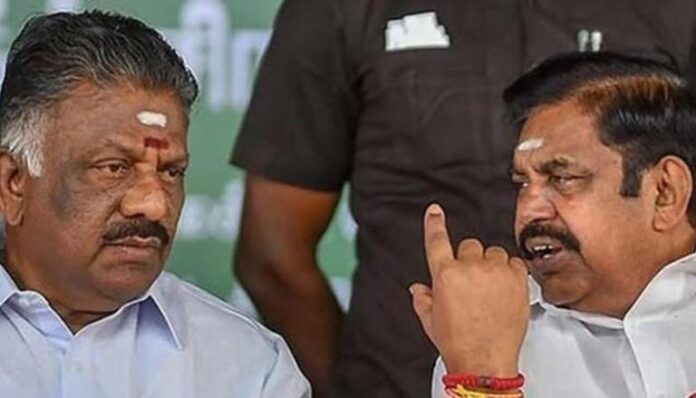 Chennai (Tamil Nadu): Ahead of the meeting of top office-bearers of the All India Anna Dravida Munnetra Kazhagam (AIADMK) on Monday at the party’s head office in Chennai on Monday, AIADMK coordinator O Panneerselvam (OPS) has said that the meeting is a violation of the party by-law.

OPS as he is known, added that meetings could be convened only with the approval of both coordinator and co-coordinator.

This comes amid the battle for single leadership in the AIADMK between former Tamil Nadu chief minister and party co-coordinator Edappadi K Palaniswami (EPS) and his former deputy CM and coordinator O Panneersevelam (OPS).

In a statement, OPS, who is the treasurer of the party said that since as a coordinator of the AIADMK he had not given any approval to the meeting and in such a case if the meeting is convened, it will be in violation of the rule.

“The meeting of headquarters functionaries was convened in contravention of party bylaw, adding that only the coordinator and co-coordinator are authorised to convene any party meeting. Under the AIADMK Law, Rule 20A (v) – the overall management responsibilities of the party are vested in the Co-ordinator and Co-Coordinator. Accordingly, any meeting must be convened with the consent of both parties. However, without the consent and signature of both parties, a notice has been issued in the name of the ‘headquarters functionaries meeting “against the rules and regulations of the party,” OPS said in a statement.

However, in February 2017, AIADMK suffered a crushing defeat in the state elections and Sasikala, Jayalalithaa’s close aide, decided to take over the leadership. Subsequently, OPS was replaced as the chief minister by EPS. This caused a lot of turmoil in the AIADMK.

As time passed by, OPS became the coordinator of AIADMK with EPS becoming the co-coordinator.

AIADMK was being run as a party with dual leadership. But now, the call for a unitary leadership has intensified and all eyes are on the crucial general council meeting on July 11.