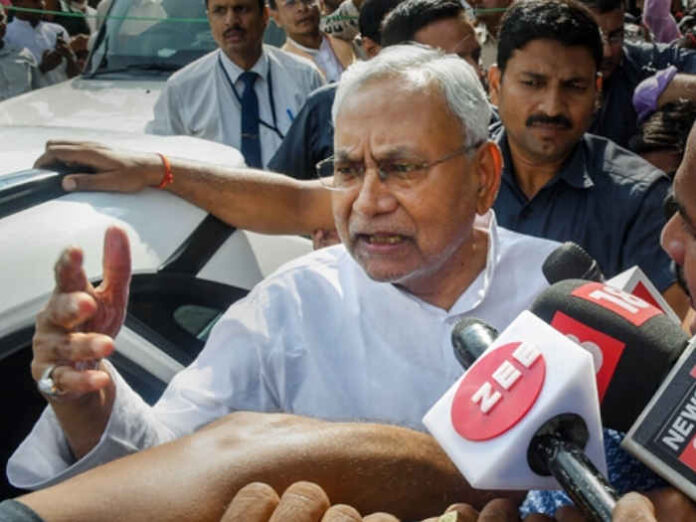 Patna (Bihar): Janata Dal (United) leader Nitish Kumar on Tuesday said that all party MPs and MLAs are in consensus that they should leave the BJP-led NDA alliance.

After submitting his resignation to the Bihar Governor, Kumar spoke to the media-persons. Caretaker Chief Minister Kumar said, “All MPs and MLAs reached a consensus that we should leave the NDA. Soon after, I resigned as Bihar CM.”

“All the meetings with the MPs, MLAs and MLCs of both the houses were held today. Everyone’s wish was that we should leave NDA. So as everyone wished, we accepted the same and submitted the resignation from the post of the Chief Minister in the NDA government,” he added.

After tendering his resignation, Nitish Kumar left the Raj Bhavan and arrived at the residence of Rabri Devi in Patna.

Kumar, earlier in the day, held a meeting with JD(U) leaders to discuss his next political moves. He then sought time from Governor Phagu Chauhan.

Around 4 pm, Kumar arrived at Raj Bhavan and met Governor Phagu Chauhan and apprised him of his decision to quit as chief minister.

All MLAs and MPs of the party supported Kumar’s decision and said that they were with him. They also asserted that they will continue to support Kumar in his decision.

Police personnel were seen deployed in force outside the chief minister’s residence.

According to sources, many JD(U) legislators told Chief Minister Kumar in today’s meeting that the alliance with the BJP had weakened them since 2020.

Without naming Chirag Paswan, the legislators are reported to have recalled the actions of the former Lok Janshakti Party (LJP) chief during the 2020 state assembly polls while warning the CM that if they were not alert, it would not be good for the party.

Paswan had fielded rebel BJP candidates on all seats fought by the JD(U) in the 2020 polls, in what some have alleged was part of a plot by the BJP to wedge its way into the ruling coalition in the state.

Meanwhile, a meeting of the RJD-led Mahagathbandhan opposition alliance was also held here today at former chief minister Rabri Devi’s residence with the participation of leaders of the CPI-ML and the Congress – part of the Opposition ‘Mahagathbandhan’ alliance in the state.

Sources said that RJD party supremo Lalu Prasad Yadav is closely watching the developments but everything was being done by Tejashwi Yadav.

Meanwhile, Lalu Prasad Yadav’s daughter Rohini Acharya took to Twitter to post about an impending political change in the state.”Get ready for the coronation, lantern holder”, she tweeted in Hindi and added a ‘victory’ emoticon to it.

The RJD-led Opposition in the state has said that it will welcome any re-alignment in Bihar’s ruling coalition without the BJP.

Ahead of the RJD convened meeting today, Congress Bihar legislature party leader Ajit Sharma said, “If Nitish Kumar comes, we’ll welcome him. If he comes we will support him. A meeting of Mahagathbandhan is being held. We should take a decision to support (him) by considering Nitish Kumar as the CM but we’ll be able to tell you only after the meeting.”
Bihar BJP leaders also met at Deputy Chief Minister Tarkishore Prasad’s residence in Patna on Tuesday.