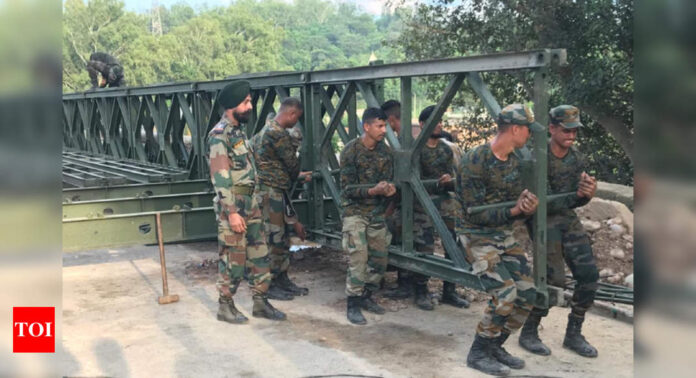 Srinagar (Jammu and Kashmir): As the annual Amarnath yatra is underway, the Indian Army reconstructed the bridges overnight on the Baltal route in a record time after they were washed away on the intervening night of Thursday and Friday.

Chinar Corps of the Indian Army is assisting the civil administration in terms of security and smooth conduct of the Shri Amarnath Yatra which started on June 30.

Bridges were washed away due to landslides following a sudden increase in temperature which resulted in swelling of Nalas near Kalimata on the Baltal route.

“On 01 Jul, 02 bridges near Brarimarg on #Baltal Axis were damaged by landslides. #ChinarCorps mobilised assets & reconstructed the bridges overnight for resumption of route & avoiding an over 4 hour detour by #Yatris,” Chinar Corps tweeted.

“The Baltal route is the responsibility of the Counter Insurgency Force – KILO. On the night of June 30/July 1 due to a sudden increase in temperature which resulted in swelling of Nalas near Kalimata on the Baltal route, the bridges at kalamata were washed away,” the Army said in a press release.

In a quick response to the call, Chinar Corps’ Kilo Force coordinated the entire effort and mobilised resources including induction of bridging stores by helicopter, mules, porters and manually by engineer regiment which also mobilised technical experts to resuscitate the fallen bridge.

“In a record time frame, the 13 Engineer Regiment of Chinar Corps laid entirely a new bridge in the night against heavy odds of weather and darkness. This resulted in a smooth recommencement of yatra and instilled a sense of safety and security among pilgrims. The act once again established that the Indian Army can deliver anywhere, anytime,” read the release.

The Amarnath Yatra is a pilgrimage to a 3,880-metre-high cave shrine of Lord Shiva, located in the upper reaches of the Himalayas.

As Amarnath Yatra has started after a gap of two years amid high threat, 200 high-powered bulletproof vehicles are placed in sensitive locations along with security forces to detect explosives as well as other tasks to ensure safe and secure pilgrimage.

Over 130 sniffer dogs have also been deployed on the vehicle routes heading towards the shrine to ensure safe pilgrimage amid heightened terror threats.