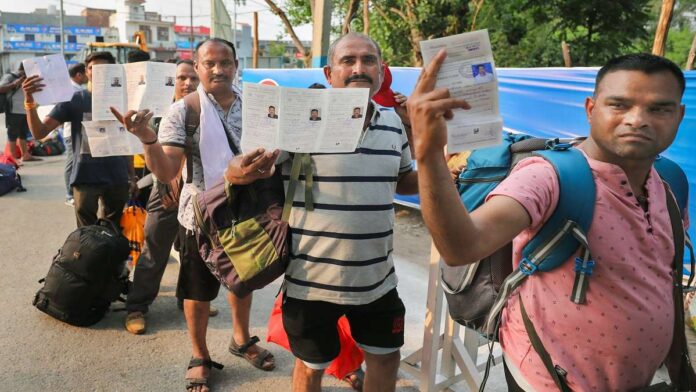 Udhampur (Jammu and Kashmir): With just one day left for the Amarnath Yatra, the first batch of pilgrims reached Udhampur on Wednesday morning.

They were welcomed by locals, PRI Members as well as officers of the District Administration. The Yatra began earlier today from Jammu amid tight security arrangements made by the Central Reserve Police Force (CRPF) along with the army and the local police.

On this occasion, District Development Council Chairman Lal Chand as well as Deputy Commissioner Udhampur Krittika Jyotsna (IAS) along with locals welcomed the Pilgrims and flagged off towards Shri Amarnath Ji Yatra.

DC Udhampur said that proper security arrangements have been made for the pilgrims.
Pilgrims reached Jammu late Tuesday night ahead of the Amarnath Yatra which will be commencing on June 30, after a gap of two years

“We were waiting for two years to offer prayers to Baba Bholenath. We are very happy to see it happen,” a pilgrim said.

Jammu and Kashmir LG Manoj Sinha met the first batch of Amarnath Yatra pilgrims from the Jammu base camp on Tuesday night.

In Jammu and Kashmir, all necessary arrangements have been completed by the Ramban district administration for the convenience of the Amarnath Yatries during their Yatra (pilgrimage) starting from Wednesday from Jammu, on the 66 Km journey from Nashri to Banihal.

Additional District Commissioner, Ramban, Harbans Lal who is also the Nodal Officer for Amarnath Yatra in Ramban district said that as many as 1,005 toilets excluding mobile toilets have been arranged for the Yatris along the NH44 as well as in the shelter sheds.
He said that a specially designated water supply has been made for the pilgrims. CCTV cameras have been installed for the security of ‘Yatris’ (tourists).

Besides this, signboards and a public address system have been made for providing necessary information for pilgrims.

In addition to this, Police Control Rooms and Joint Control Rooms the Helpline, and District Emergency Operation Centre numbers have also been established.

Meticulous arrangements have been made for sanitation at their shelter places.

All arrangements have also been made for any medical emergency of Yatris in the langars and other shelter sheds under the supervision of the Chief Medical Officer.

In the Ramban district along the NH-44, as many as 33 Langars by various religious and philanthropic organizations are all set to serve the pilgrims.

In these langars besides free breakfast, lunch and dinner would be provided to the pilgrims. Besides this, there would be beds for night stays and free medicines in case of emergency.

Nodal Officers have been deputed for ensuring the smooth running of langars. Besides langars, many wayside eateries and food joints have been established.

Security has been tightened in Jammu and Kashmir with special emphasis on the use of over 130 sniffer dogs on the vehicle routes heading towards the shrine to ensure safe pilgrimage amid heightened terror threats.