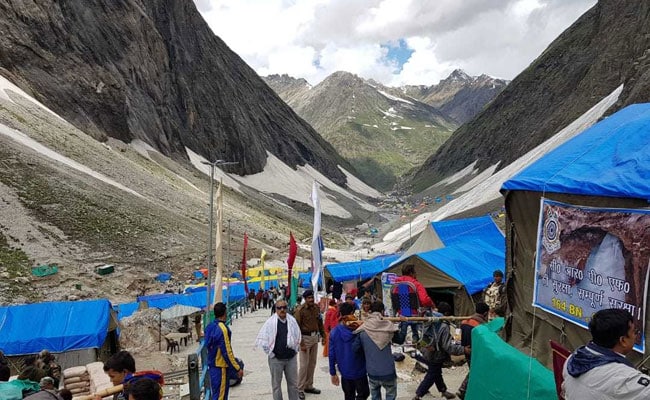 Srinagar (Jammu and Kashmir): A fresh batch of Amarnath Yatra pilgrims left from the Jammu base camp for Baltal and Pahalgam base camps in Kashmir.

“We are heading towards the Pahalgam camp and are hoping that yatra will resume. We pray to Baba Bholenath to protect all the pilgrims,” said a pilgrim.

Earlier on Friday, the pilgrimage was suspended till the situation returns to normal, officials informed.

Earlier on Friday, Thirteen people were killed and over 48 others injured when a cloudburst struck the area near the holy shrine of Amarnath, said Dr A Shah, Chief Medical Officer Ganderbal, Jammu and Kashmir.

As of now, all the injured patients are being taken care of at all three base hospitals: Upper Holy Cave, Lower Holy Cave, Panjtarni and other nearby facilities en route to the holy cave by the health care workers deputed at these stations.

A cloudburst incident took place at the holy cave area of Amarnath on Friday which resulted in a heavy discharge of water in the ‘Nallah’, adjoining the holy cave.

According to the Indo-Tibetan Border Police (ITBP) officials, the cloud burst occurred at the lower holy cave (Amarnath) at around 5.30 PM and the rescue teams rushed to the spot.