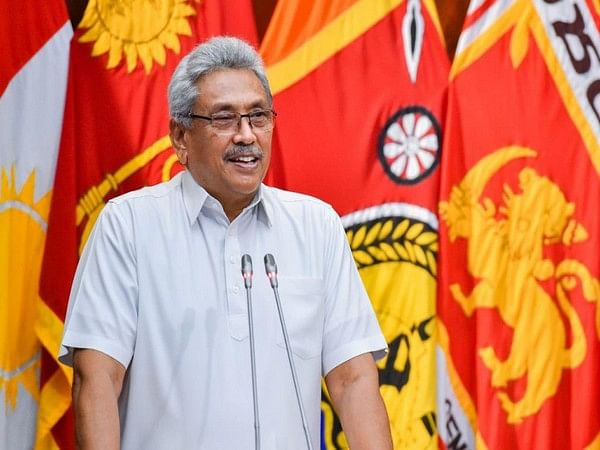 Colombo [Sri Lanka]: Hours after thousands of protesters stormed his official residence in the capital of Sri Lanka, President Gotabaya Rajapaksa on Saturday agreed to step down from his post.

Rajapaksa has informed that he will resign from the Presidency on the 13th July, Speaker Mahinda Yapa Abeywardena announced in a press conference this evening, according to Sri Lanka’s news outlet Newswire. The development came following the announcement of resignation by Sri Lankan Prime Minister Ranil Wickremesinghe from his post.

Earlier, Abeywardene in a letter addressed to the President informed him that he should resign from his post immediately and convene Parliament in seven days to appoint an acting President, Daily Mirror reported. He has also informed that the new administration should be formed with a new Prime Minister and then go for a general election after a specific time period.

Dramatic visuals from outside Rajapakse’s residence on Saturday showed a sea of demonstrators storming into the compound, tearing down security cordons placed by police, taking a dip in the swimming pool and romping through his kitchen and home.

CNN cited security officials to say that Gotabaya Rajapakse was not at the site and has been moved elsewhere.

Later in the day, protesters broke into Wickremesinghe’s private residence and set it on fire, angered by the unprecedented economic crisis.

Wickremesinghe, who was appointed as Prime Minister in May, has announced that he will resign from his post in order to ensure the continuation of the government and the safety of all the citizens.

Taking to Twitter, Wickremesinghe said, “To ensure the continuation of the Government including the safety of all citizens, I accept the best recommendation of the Party Leaders today, to make way for an All-Party Government. To facilitate this, I will resign as Prime Minister.”

Earlier, Sri Lankan Prime Minister said in a statement that he took this decision in view of the fact that island-wide fuel distribution is due to recommence this week, the World Food Program Director is due to visit the country this week and the Debt Sustainability report for the IMF is due to be finalised shortly.”

“So as to ensure the safety of the citizens, he is agreeable to this recommendation by the Opposition Party Leaders,” the statement reads.

Meanwhile, Sri Lankan MP Harsha de Silva said that the majority of party leaders had agreed on President and Prime Minister’s resignation and the Speaker to act as President for a maximum of 30 days. He further said that the leaders also agreed on the election of

MP as President for the remaining term will be elected by the parliament.

“All party interim government to be appointed in the next few days,” he added.
Earlier, Prime Minister Ranil Wickremesinghe summoned an emergency Party Leaders meeting to discuss the situation and come to a swift resolution.

The worsening economic situation in the country has led to increasing tensions and over the last few weeks, there were reports of several confrontations between individuals and members of the police force and the armed forces at fuel stations where thousands of desperate members of the public have queued for hours and sometimes days. Police have used tear gas and water cannon at times in an unnecessary and disproportionate manner. On occasions, armed forces have also fired live ammunition.

Sri Lanka is suffering its worst economic crisis since gaining independence in 1948, which comes on the heels of successive waves of COVID-19, threatening to undo years of development progress and severely undermining the country’s ability to achieve the Sustainable Development Goals (SDGs).

The oil supply shortage has forced schools and government offices to close until further notice. Reduced domestic agricultural production, a lack of foreign exchange reserves, and local currency depreciation have fuelled the shortages. The economic crisis will push families into hunger and poverty – some for the first time – adding to the half a million people who the World Bank estimates have fallen below the poverty line because of the pandemic.