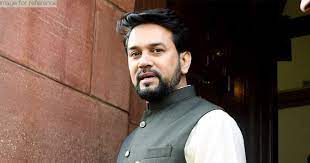 New Delhi [India]: Union Minister Anurag Thakur on Saturday appealed to the youth, who are protesting against the recently launched Agnipath Scheme of the Centre for the recruitment into the Armed Forces, not to indulge in violence and said that the government is “seriously listening to their concerns”.

Protests broke out in various parts of the country following the launch of the scheme. In some parts of the country, the protests took a violent turn where stone-pelting was witnessed at some places while trains were set on fire at some places including Bihar and Telangana. Speaking to ANI, Thakur said that the Ministry of Youth Affairs & Sports is mulling over bringing out something for the Agniveers when they retire from service in the Armed Forces.

“I appeal to youth that violence is not the right way. Govt is seriously listening to your concerns. Ministry of Youth Affairs and Sports also mulling to do something for them when they come after 4 years of their service to provide some crash courses and to provide training to those who want to become physical education teachers,” he said.

Meanwhile, Defence Minister Rajnath Singh on Saturday approved a proposal to reserve 10 per cent of the job vacancies in the Ministry of Defence for ‘Agniveers’ meeting requisite eligibility criteria.

According to the Office of the Defence Minister, the reservation will be implemented in the Indian Coast Guard and defence civilian posts, and all the 16 Defence Public Sector Undertakings.

The announcement of the Ministry comes amid the protests that broke out following the launch of the Agnipath Scheme by the Centre which is a new recruitment procedure for the Defence Forces. Notably, the protests have turned violent in many parts of the country.

Earlier today, the Ministry of Home Affairs announced that ‘Agniveers’ will be absorbed into the Central Armed Police Forces (CAPFs) and Assam Rifles at the end of their four-year term in the army.