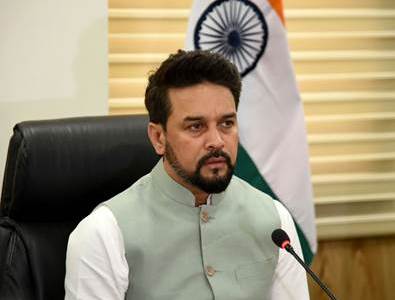 New Delhi [India]: Around 9.5 crore rupees have been released under the “Sports for Women” component of the Khelo India Scheme to increase women’s participation in sports since 2020, Union Minister Anurag Thakur informed on Tuesday.

Minister of Youth Affairs and Sports Thakur, in a written reply in Lok Sabha on Tuesday informed, “All schemes of the Department of Sports are gender neutral and cater to all sportspersons equally. However, one of the components of the Khelo India Scheme “Sports for Women” is specifically dedicated towards the promotion of sports among women.” Also, under this component, Women’s Leagues in various disciplines are conducted in collaboration with the National Sports Federations, in order to increase the participation of women in sport, utilize the league as a platform for talent identification and provide competition exposure to women athletes of the different age groups, the Ministry of Youth Affairs and Sports informed in a statement on Tuesday, the written reply read.

Further, to provide special emphasis on the promotion of sport among the talented women sportspersons in the country, the Sports Authority of India (SAI) has established one National Centre of Excellence (NCOE) and three SAI Training Centres (STCs) exclusively for women.

Besides, a total number of 3146 women athletes are trained across the country under the Sports Promotional Schemes of SAI.

Further, under the “Talent Search and Development” component of Khelo India Scheme, 1374 women athletes are being trained across the country and supported with a maximum financial assistance at the rate of Rs 6,28,400 (including Rs 1,20,000 as out of pocket allowance) per annum per athlete.

With a view to achieving the twin objectives of mass participation and promotion of excellence in sports, the Government in February this year decided to continue the Scheme of “Khelo India – National Programme for Development of Sports” over the 15th Finance Commission Cycle (2021-22 to 2025-26) at an outlay of Rs 3165.50 crore.

Anurag Singh Thakur thanked Prime Minister Narendra Modi for approving the continuation of the Khelo India Scheme. The Minister stated, “On behalf of the Ministry and all stakeholders, I express our deep gratitude to the Prime Minister for extending the tenure of the Khelo India Scheme for another five years as well as bringing it into national prominence by increasing its budgetary allocation by 48 per cent in Budget 2022 and including it in the PM’s Awards Scheme.”

The Khelo India Scheme is the flagship Central Sector Scheme of the Ministry of Youth Affairs and Sports. It aims at infusing sports culture and achieving sporting excellence in the country thus allowing the populace to harness the power of sports through its cross-cutting influence.

The Khelo India programme includes playfield development; community coaching development; promotion of community sports; establishment of a strong sports competition structure at both school and university level as also for rural/indigenous sports, sports for persons with disability and women sports; filling up of critical gaps in sports infrastructure, including creation of hubs of sports excellence in select universities; talent identification and development; support to sports academies; implementation of a national physical fitness drive for school children; and sports for peace and development.