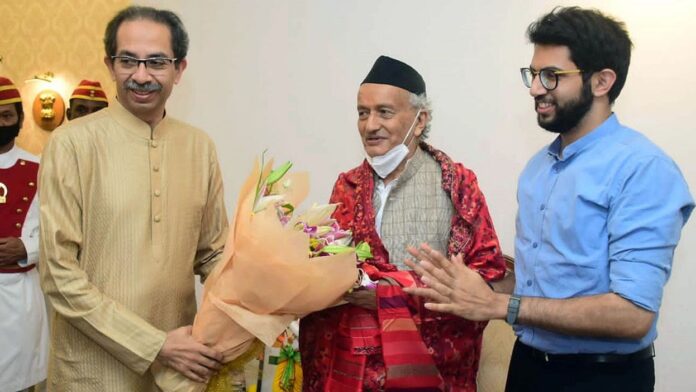 Earlier, Maharashtra Governor Bhagat Singh Koshyari has asked the Uddhav Thackeray government in the state to prove his majority on the floor of the House on June 30.

The Governor has written to the state Assembly secretary to convene a special session of the State Assembly tomorrow with the only agenda of a trust vote against CM Thackeray.

According to the notification, the session will commence at 11 am which will also be telecast live.

Notably, this comes after Leader of Opposition and former chief minister Devendra Fadnavis visited the Governor on Tuesday night after returning from Delhi, and submitted a letter to him demanding an immediate floor test.

According to the sources, a few independent MLAs had also sent an email to the registered email address of the Maharashtra Governor demanding an immediate floor test.

“In this backdrop, an email dated June 28, 2022, was received by Raj Bhavan, Mumbai by 7 independent MLAs. The said letter states that the Chief Minister of Maharashtra has lost the confidence of the majority on the floor of the House thereby, making it imperative to conduct a floor test at the earliest,” the notification stated.

“As the constitutional head of the State. I must ensure that the Government functions with the support and confidence of the House. Thus, I have issued a communication to the Chief Minister calling upon to prove his majority on the Floor of the House on June 30, 2022,” it further stated.

Earlier this morning Eknath Shinde, visited the famed Kamakhya temple in Guwahati, where he is camping in a hotel along with other rebel Shiv Sena MLAs.

Shinde said that he is ready for the floor test and will return to Mumbai tomorrow.

“I will return to Mumbai tomorrow. I prayed for the welfare of the people of Maharashtra here at the temple,” Shinde said after visiting the temple in Guawahati.

Meanwhile, Shiv Sena MP Priyanka Chaturvedi on Wednesday said holding of the floor test amounted to contempt of the Supreme Court proceedings as the apex court is hearing the relating to the disqualification of 16 MLAs of the breakaway camp of the Shiv Sena led by Eknath Shinde.

“How can a floor test be asked for when the disqualification of 16 MLA has deferred by the Supreme Court till 11th July? How can these MLAs participate in the floor test till their disqualification status not decided and the other matters for which notice sent is sub-judice?” she tweeted.

“This would be contempt of court proceedings if floor test conducted despite the matter not getting final hearing in the SC,” Chaturvedi added in her tweet.

In a jolt to the Maha Vikas Aghadi government in Maharashtra, senior Shiv Sena Minister Eknath Shinde and other rebel MLAs revolted against the party on June 20 and camped in Gujarat’s Surat. Later, the rebel MLAs shifted base to a hotel in Guwahati.

On Monday, a separate plea was filed by Shinde in Supreme Court court regarding the safety of the legislators who have challenged party chief and Maharashtra chief minister Uddhav Thackeray. A bench of Justices Surya Kant and JB Pardiwala heard the pleas on Monday.

“This is the win of the Hindutva of Balasaheb Thackeray and the ideas of Anand Dighe,” Eknath Shinde tweeted after the Supreme Court deferred the disqualification proceedings of rebel MLAs till July 11.