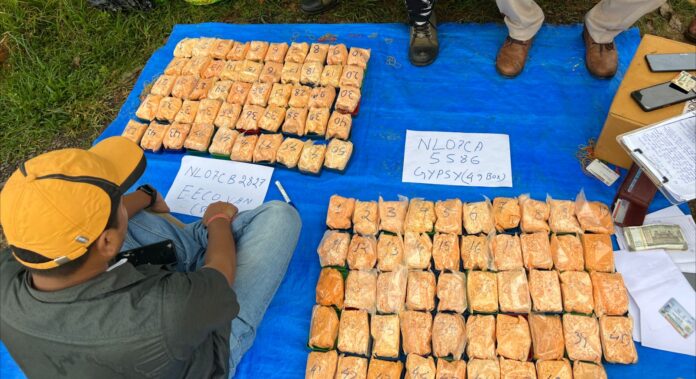 The arrested drug peddlers were identified as Pavei Saichama (25), Veio (42) and Avi alias Angela (25). Acting on a tip-off, a joint team of police and CRPF led by John Das, Sub-Divisional Police Officer (SDPO) of Bokajan launched an operation and set up a Naka checking at Rengma Basti Tini Ali under Khatkhati police station.

“At about 4 pm on Sunday, two vehicles are intercepted which were coming from Manipur and they have used the Rengma Basti road to avoid the regular checking of Khatkhati Check Post. On thorough search of the vehicle, a total of 99 boxes of heroin have been recovered. The total weight of the heroin is 1.330 kg,” Das said.

The market value of the seized heroin is estimated at around Rs 10 crore, he said.
“The case has been registered in this regard and three drug peddlers including one female have been arrested,” a police official further said.

Two bags with 55 soapboxes containing 711.06 grams of heroin were recovered from the vehicle.

Earlier on Thursday, a special team of Guwahati Government Railway Police (GRP) arrested four persons and recovered 10.11 kg of opium from their procession.

“They carried the Opium from Dimapur to Howrah and opium with a market value of approximately Rs 10 crore was recovered from them,” the official said.