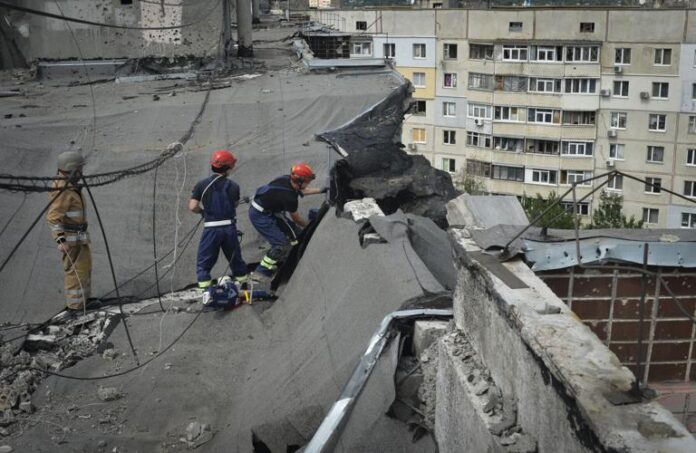 Kyiv [Ukraine]: At least 21 people were killed and dozens injured when the Russian missile on Friday struck a residential tower and a recreational centre in the southern Ukrainian region of Odessa.

One of the missiles hit the nine-storey residential tower in Serhiivka, killing at least 16 and injuring 38 people, according to The New York Times citing Ukraine’s state emergency service. And then another missile hit a recreational centre, where five people died and one was injured, emergency officials said on Telegram.

The residential tower, which is home to 100 people, has been destroyed on one side, according to the Ukrainian regional military administration.

They were still going through the rubble of the recreational centre, officials said. The missiles struck around 1 a.m.

The Kremlin’s spokesman, Dmitri S. Peskov, again denied on Friday that Russia was targeting any civilian infrastructure. “I would like to again remind you of the words of the president of the Russian Federation and commander in chief that the Armed Forces of the Russian Federation are not working against civilian targets in the course of the special military operation,” Peskov said as quoted by The New York Times.

He further said that Russia’s target included ammunition and arms depots, plants that manufacture and repair military equipment, and places where “foreign mercenaries” and “nationalist elements” are based and trained.

The attack came as Russian troops withdrew from Snake Island after occupying the strategic Black Sea outpost for months.

Snake Island, a tiny piece of land about 25 miles off Ukraine’s southeastern coast, sits on a major shipping lane and is an important access point to the key port of Odessa.

As per the report by The Washington Post, “the Ukrainian artillery, rockets and airstrikes this month pushed the Russians out of the Snake Island,” wrote Commander in chief of the Ukrainian armed forces, Valery Zaluzhny in a Facebook post.

He also shared a video of missiles hitting the island and claimed a week earlier it had taken out Russian anti-aircraft systems there. However, Russia denied its systems had been destroyed.

“Russian forces tried unsuccessfully to stymie the assault with nighttime fighter jet attacks on the coast of the Odessa region,” the Ukrainian military’s southern command said on Facebook.

As the Ukrainian military operation continued, Russian troops remaining on the island “hurriedly evacuated” the garrison on two speedboats, the statement added.

Taking to Telegram, Andriy Yermak, the head of Ukrainian President Volodymyr Zelensky’s office said “On Snake [Island] there are no more Russians,” stating further that the Ukrainian Armed Forces conducted a wonderful operation and knocked them out, the report said.

He also thanked foreign allies for weapons that aided the fight.

On February 24, Russia began a military operation in Ukraine due to which almost 14 million Ukrainians have been forced to flee their homes, according to United Nations (UN) estimates and most of those displaced are women and children.

Almost two out of every three children have been displaced by incessant rocket attacks and fighting between the two nations.