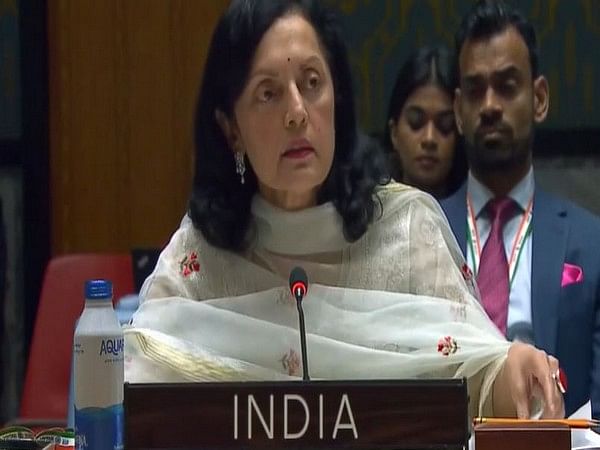 New York [US]: India on Tuesday said it remained concerned with the situation at the Zaporizhzhia Nuclear Power Plant (ZNPP) in Ukraine, saying that any accident involving nuclear facilities could potentially have disastrous consequences.

Addressing a United Nations Security Council briefing, the country’s Permanent Representative to the UN, Ruchira Kamboj said that India continues to carefully follow developments regarding the safety and security of Ukraine’s nuclear facilities and it attaches high importance to ensuring the safety and security of these facilities. The ambassador said India also accords high priority to the discharge by the International Atomic Energy Agency (IAEA) of its safeguards and monitoring activities, in accordance with its Statute in an effective, objective and efficient manner.

“India remains concerned over the situation at the Zaporizhya Nuclear Power Plant. We support the ongoing efforts including that of the IAEA to reduce tensions and steps to ensure nuclear safety and security at the facility,” Kamboj said.

This concern comes as recent weeks have seen an escalation in shelling in and around Europe’s largest nuclear facility.

The UNSC meeting was requested by Russia, whose forces have occupied the plant since March, or shortly after the start of the war, while Ukrainian personnel continue to carry out their on-site operations.

“We have noted the latest information available with regard to the nuclear power plants and facilities in Ukraine, including the updates published on August 19 by the IAEA. We hope the proposed visit by a team from IAEA to the Zaporizhzhia Nuclear Power Plant (ZNPP) and its surrounding areas will be agreed by the two sides, as indicated in their recent statements,” she added.

The Indian envoy to the UN said that New Delhi will continue to reiterate that the global order is anchored on international law, the UN Charter and respect for the territorial integrity and sovereignty of states.

Speaking at the same briefing, UN political affairs chief Rosemary DiCarlo said that an agreement is urgently needed to reestablish the Zaporizhzhia Nuclear Power Plant (ZNPP) in Ukraine as purely civilian infrastructure and prevent a potentially “catastrophic” disaster.
DiCarlo reiterated the UN’s ongoing grave concern over the dangerous situation, recalling the Secretary-General’s appeals for common sense, reason and restraint, as well as dialogue.

The UN has again called for the parties to provide the IAEA with immediate, secure, and unfettered access to the nuclear plant.

IAEA chief Rafael Mariano Grossi on Tuesday renewed his request to send a mission to carry out essential safety, security and safeguard activities at the site.