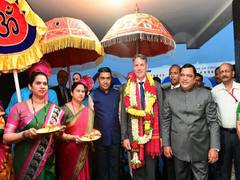 Sri Lanka currently faces its worst economic crisis in seventy years, leading to shortages of food, medicine and fuel. The island nation’s worst economic crisis in seven decades led to a shortage of foreign exchange that stalled imports of essential items such as fuel and medicine and fertiliser. “We will contribute an immediate USD 22 million to the World Food Programme for emergency food assistance to help three million people in Sri Lanka meet their daily nutritional needs. Australia will also provide USD 23 million in development assistance to Sri Lanka in 2022-23,” the ministry said in a statement.

The Australian foreign ministry said it has a close and long-standing relationship with Sri Lanka. “Not only do we want to help the people of Sri Lanka in its time of need, there are also deeper consequences for the region if this crisis continues,” the statement said.
This will support health services, and economic recovery, with a strong emphasis on protecting those at risk, especially women and girls.

This assistance was announced as Australian Home Affairs Minister Clare O’Neil visited the country on Monday. This visit coincides with the 75th anniversary of diplomatic relations between the two countries.

The Daily Mirror reported that the trip also follows the interception of multiple asylum seeker boats travelling to Australia from the nation in recent weeks.

The Australian Border Force has reportedly intercepted three asylum seeker boats since the election on 21 May, prompting renewed concerns over the issue.

O’Neil met with Sri Lankan President Gotabaya Rajapaksa to discuss how Australia can assist Sri Lanka through its economic struggles and engagement in combating people smuggling.

The newly elected Prime Minister Anthony Albanese said his government wanted to use the trip to send a message that “people who arrive by boat” would not be settled in Australia.
“We understand that there are issues in Sri Lanka and that the wrong messages are being given by people smugglers – our message will be very clear,” he said.

PIL In HC To Constitute Welfare Board For Home Nurses, Domestic Workers