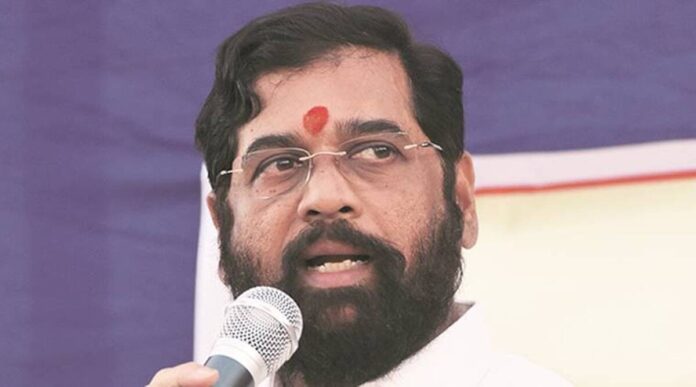 Mumbai (Maharashtra): Hitting out at Uddhav Thackeray for his jibe at him, Maharashtra Chief Minister Eknath Shinde on Wednesday referred to his past in which he drove an autorickshaw and said “autorickshaw has left Mercedes behind”.

“(Auto) rickshaw has left the Mercedes behind because this government is for common people, this is a government to give justice to every section. We will perform in a way that every constituent, everyone feels it is my government, it will work for me. This will be the difference,” Shinde said.

Shinde was responding to a question on Shiv Sena chief Uddhav Thackeray’s remarks on Tuesday in which he had said that the BJP used to call the MVA government a three-wheeler government but now the person who drove three-wheeler is running the government. Thackeray also accused Shinde of backstabbing him.

Shinde led the revolt in Shiv Sena which eventually forced Uddhav Thackeray to resign on June 29 as chief minister of the Maha Vikas Aghadi government which also included the Congress and Shiv Sena.

Referring to the BJP’s support in forming the government, Shinde said the party had shown to people of the country that they are not only for power but also for ideology.

“All were anticipating, there was a perception in the public that BJP does anything for power. But they have shown to the country that these 50 people have taken a Hindutva position, an ideological position and their agenda is of development and Hindutva and they should be supported. And they supported us despite having more numbers, more MLAs. They gave us support for the post of Chief Minister,” Shinde said.

The Chief Minister said Prime Minister assured of his and the Centre’s full support in development endeavours.

“This is a big thing. The Centre is also with us. We have not done anything illegal. The pre-poll alliance was between BJP and Shiv Sena. We are allying with that party.”

Asked about his remark of their alliance winning 200 seats in the next assembly polls, Shinde said 170 MLAs are with the alliance and only 30 more remain. “We can get more than 200 seats,” he said.

Shinde said it was unexpected for Fadnavis but he followed BJP directions.

“It was unexpected for him, but he followed party directions. And a worker like me of Balasaheb and Anand Dighe was made the chief minister, I am thankful to PM Modi, Home Minister Amit Shah and BJP chief JP Nadda. They have given an opportunity and changed the perception that BJP is not only a part for power but also for ideology,” he said.

Answering a question on cabinet formation, he said it will be discussed and a decision taken soon.

Shinde said he had several times apprised the Shiv Sena leadership that the party was not gaining from being part of the MVA government and was getting damaged.

He said that Shiv Sainiks faced “injustice” and “tough laws like MCOCA”.

“Talked several times that MVA of which we were a part, we are not gaining from it, it is damaging us, our MLAs are worried, how will we fight the polls, win them, we were fourth in local body polls. Despite having a CM, we were number four. It means who is taking advantage of the government, Shiv is not benefitting, other constituents. Is Shiv Sainik gaining, no. What did they get, despite the party being in power, they got nothing, they faced injustice, faced false cases, tough laws like MCOCA, then why is the government?”.

“When there is power then Shiv Sainik should get justice, they should be enabled to be self-dependent but there was no change in their lives and they faced damage, they faced injustice,” he said.

Shinde said they tried to make the leadership change its decision to allying with Congress and NCP but did not succeed.