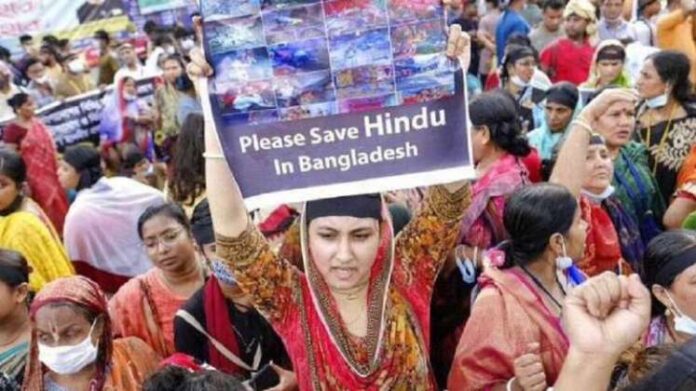 Dhaka [Bangladesh]: There are reports of Hindu minorities being attacked in Bangladesh amid rumours of alleged Facebook post slandering Islam.

Their homes were set on fire during Friday’s communal attack on properties owned by Hindu people in Sahapara area of Lohagara, Narail, reported Daily Star.

The mobs went on a rampage after Juma prayers, saying that an 18-year-old man from the neighbourhood hurt their religious feelings on Facebook.

Locals alleged the post was made by Akash Saha, an 18-year-old college student in the village. They gathered after Juma prayers and protested in front of the student’s house, demanding his arrest, reported Daily Star.

As he was missing, the mobs spread to neighbouring homes of Hindu minorities– homes of people who had nothing to do with the Facebook post.

One of the victims of the rampage, Deepali Rani Saha shared the ordeals of vandalisation whose house was burned down, reported Daily Star.

“After one group looted all our valuables, another group came and found our door open. As there was nothing left to loot, they set our home on fire.”

“I don’t know how long this threat of violence will haunt us. Who will give us justice? Who will give us security? … If I were in the house while they set it on fire, I would have died. God saved me. But is this any way to survive? All I have now is the sari on my body,” she added.

Deepali’s was among the three homes and dozens of shops that were vandalized or burnt down in Sahapara village, reported Daily Star.

In the evening, the police detained Akash’s father Ashoke Saha to “bring the situation under control”, while they prepared to file a case under the Digital Security Act against Akash.

None of the attackers, however, have been arrested yet, reported Daily Star.

Police have deployed additional forces to ensure security, but locals still feel unsafe.
After the attack, an eerie and empty silence took over the region it houses Hindu minorities in Sahapara village.

Rights bodies across the country have condemned the communal attack, reported Daily Star.

Mashrafe Bin Mortoza, parliamentarian and ex-captain of the Bangladesh cricket team, who represents Narail, in a Facebook post said, “The Narail I know, the Narail I grew up in — this is not that Narail.”

Meanwhile, Ain o Salish Kendra in a statement, said, “This is not a new incident. We have seen such attacks before — these keep repeating because there is no independent investigation and no probe [is done] in due time.”

Bangladesh Udichi Shilpigoshthi also issued a statement saying the impunity given to perpetrators of communal violence paves the way for more such attacks.

“Within a month, Narail has seen two communal attacks. The local administration and political elites in the area can barely criticise these attacks, let alone prevent them,” they said.

It is pertinent to note that last year in October, a Facebook post triggered widespread violence against the Hindu community in Bangladesh.

Several Durga pandals were vandalised, close to 150 families were attacked and at least three Hindus were reportedly killed in the violent clash.

In mid-October, communal riots broke out in Bangladesh after a mob vandalised a Hindu temple in Cumilla.

After the incident, more Hindu temples and houses were vandalised, leaving scores of people injured and some dead in the chaos that went on for around a week.