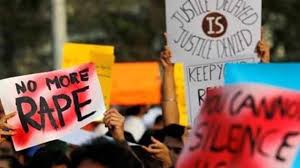 Barmer (Rajasthan): One person was arrested from Hyderabad on Monday on charges of allegedly raping a minor girl in Rajasthan.

The case pertains to the rape of a minor 16-year-old girl who was raped on September 24 when she had gone to collect cow dung.

The accused named Madan Singh was arrested in Hyderabad on Monday.

Earlier on September 26, The victim’s mother reported the incident to the police after the victim told her mother about the incident.

As per the complaint, the victim had gone out to take cow dung.

He suggested her to take the cow dung from near the school bathroom.

As soon as the victim went inside trusting him, the accused grabbed her, took her inside the bathroom, and raped her.

Some women heard the victim’s cries and reached there, but the accused had run away by then.

The police registered the case against the accused and took the victim’s statements. The medical of the victim was also done after that.

The case is being investigated under the supervision of DSP Shubhkaran.

The accused was arrested from Hyderabad and he is being interrogated.

Further details are awaited in the case.