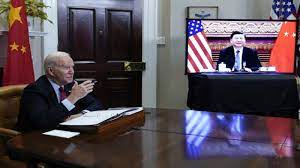 Washington [US]: US President Joe Biden agreed to meet ‘face to face’ with his Chinese counterpart Xi Jinping in near future, as decided during the fifth phone call between the two leaders on Thursday, a senior White House administration official said.

The phone call comes amid heightened tensions between the geopolitical rivals with Beijing issuing warnings against the US House of Representatives Speaker Nancy Pelosi’s scheduled visit to Taiwan in August.

Addressing a media briefing, House Press Secretary Karine Jean-Pierre said, “The conversation was substantive, it was in-depth, and it was candid.”

“President Biden has continually emphasised the importance of maintaining open lines of communication to ensure that the United States and China manage our differences and work together on areas of shared interest. This call was part of our ongoing efforts to do that,” she added.

“They also discussed the value of meeting face-to-face and agreed to have their teams follow up to find a mutually agreeable time to do so,” the statement added.

US President noted that US-China cooperation benefits not only the two peoples but also people of all countries.

The official further said that it is important for the United States and China to work together on areas where our interests align, even when we have substantial differences or are engaged in competition in a number of different areas.

“But this is what responsible nations do. They manage areas where they have differences, and they find ways to work together for the good of their own people and for the common good of the people of the world, she added.

The official further revealed that during the phone call, the two leaders held a detailed discussion of areas where the two countries can work together, with a particular focus on climate change and health security, as well as counternarcotics.

Biden also raised the need to resolve the cases of American citizens who are wrongfully detained or subject to exit bans in China, as well as longstanding concerns about human rights.

“The two leaders had an in-depth discussion about Taiwan. President Biden reaffirmed the United States’ commitment to our One China Policy, guided by the Taiwan Relations Act, the Three Joint Communiques, and the Six Assurances.” Jean-Pierre said.