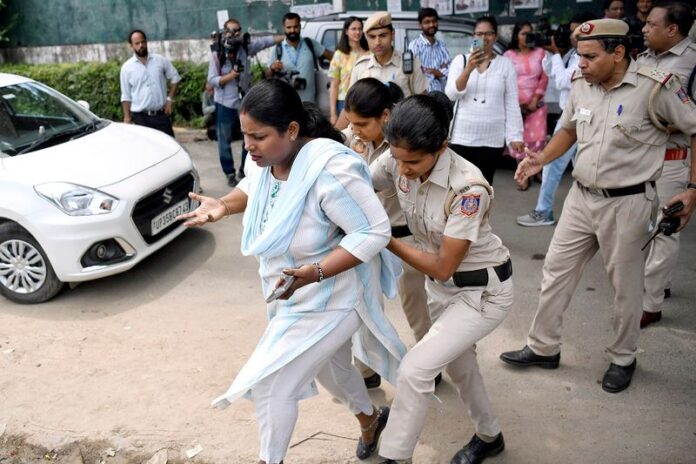 New Delhi [India]: Bharatiya Janata Party Delhi unit chief Adesh Gupta on Friday said that the leaders of the Aam Aadmi Party have become furious ever since the Central Bureau of Investigation raided the residence of Delhi Deputy Chief Minister Manish Sisodia in the morning.

Addressing a press conference of the party in the national capital, he further alleged Sisodia duped crores of Delhi’s revenue by colluding with the liquor mafia. “Ever since the new excise policy came into force, Sisodia along with Kejriwal kept making money by colluding with the liquor mafia. And when the CBI started the investigation, they started talking about numerous things on the fear of being exposed,” Gupta said.

“Sisodia, who was praising the New Excise Policy by highlighting the perks on 16 November 2021, took back his words in nine months on August 6 and said that there was a loss in Delhi’s revenue due to this policy,” he added.

“The Lieutenant Governor (LG) took a u-turn to benefit some liquor shop owners. The LG changed his own policy as approved 48 hours earlier. Due to his decision, thousands of crores were lost to the government and some shopkeepers got the benefit of thousands of crores. I’ve written to the CBI to probe ex-LG’s change of stance on the opening of liquor shops in unauthorized areas,” Sisodia had said on August 6.

“The decline in the revenue of Delhi is the result of the collaborative attempt (of Sisodia and liquor mafia) that led to this scam worth crores after the AAP government forgave Rs 144 crores of the liquor mafia and reduced the price rate of alcohol,” Gupta alleged.

Gupta further added that the coming generations will remember how “the Chief Minister of Delhi made it the liquor city to fill his pockets at a time when the entire nation was battling with coronavirus pandemic.”

The excise policy was passed by the Kejriwal-led Delhi Cabinet on November 17, 2021.