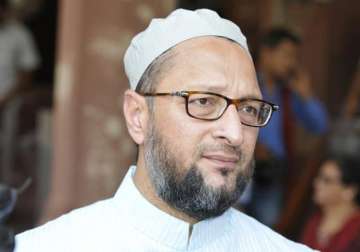 “The Prime Minister said his party’s slogan is sabka saath, sabka vikash aur sabka viswas. But this always has been false. The data given by the Ministry of Urban and Housing Affairs reveals that out of the 32.26 lakh loans meant for street vendors under the SVANidhi scheme, only 331 loans were disbursed to minorities. Why is the government cheating with the minorities or Muslims?”, said Owaisi. “The government data says the share of Muslims in self-employment in urban areas is 50 per cent. Now, Muslims have a 50 per cent share but only 331 loans were given to minorities. It is clear the government is fulfilling the dream of Golwalkar and Savarkar to make Indian Muslims second-class citizens. BJP’s core voters get happy with these policies. The BJP government is not giving the due share of Muslims in government schemes,” added the AIMIM chief.

Taking to Twitter, he shared a link to a blog of a Commonwealth Human Rights Initiative (CHRI) in which a Right To Information (RTI) query by Venkatesh Nayak, a member of the CHRI, was mentioned.

According to the data shared by the Union Ministry of Housing and Urban Affairs (MoHUA) on the RTI query, only 0.01 per cent of street vendors belonging to minority communities have benefitted from the Centre’s PM SVANidhi scheme between June 2020 and May 2022.
A total of 32.26 lakh loans were disbursed across the country under the scheme during this period of which only 331 of these beneficiaries are street vendors belonging to minority communities. This is 0.0102 per cent of the total number of beneficiaries.

The RTI query also mentioned that only 3.15 per cent of beneficiaries were from the ST category and just 0.92 per cent were persons with disabilities (PwD).

Uttar Pradesh reported the highest success rate of 100 per cent, meaning all 12 applications were able to secure the first loan, followed by Delhi, Telangana and Gujarat.

Even though Maharashtra did record the largest number of applications for both first and second loans, the success rate in the state was only 56.45 per cent.

When it comes to those in the PwD category, Tamil Nadu had the highest number of first loan applications (8,631) followed by Uttar Pradesh and Karnataka.

Out of the loans disbursed to those in the PwD category, Uttar Pradesh recorded the highest number (7,278) for first and second loans.

The country-wide PM SVANidhi scheme for street vendors was implemented by the Centre in June 2020.