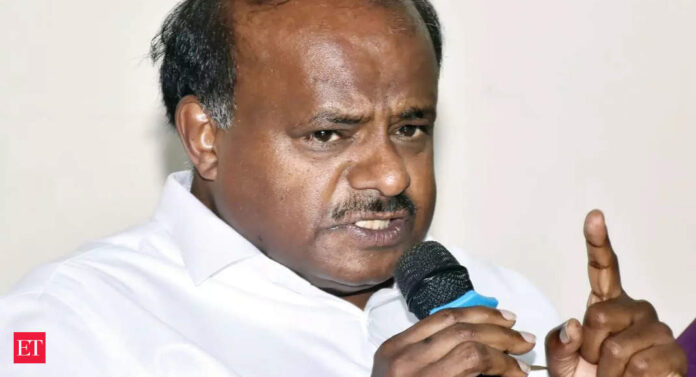 Bengaluru (Karnataka): Former Karnataka Chief Minister and JD(S) legislative party leader HD Kumaraswamy criticized the BJP government in Karnataka and at the Centre, saying that the ‘BJP is pro-rich and is looting people’s money in the name of development.

“BJP government is looting people’s tax money in the name of development. I am not running any predatory firms. These parties will create another Sri Lanka for you. So you decide do you want such parties,” said Kumaraswamy. Sri Lanka is suffering its worst economic crisis at present, threatening to undo years of development progress and severely undermining the country’s ability to achieve the Sustainable Development Goals (SDGs).

He warned that if poor people are harassed, then Sri Lanka kind of response will be seen here too.

While inaugurating the Janata Mitra program held at Abbigere and Hosakerehalli in Dasarahalli, he said, “Some people are saying that JD(S) party has no base in Bengaluru. I will show whether our party has a base in the city or not in the next Assembly elections. If there is violence against the poor, the situation in Sri Lanka will also happen here. Do you want political parties to create another Sri Lanka.”

According to him, Bharatiya Janata Party is for rich people.

“Don’t trust BJP. Don’t be fooled by PM Modi’s words. Modi and BJP party is for the rich, they come to get votes by paying money during elections. They are having fun looting your money. He is on the side of the rich, not the poor.”

Further speaking on the PSI recruitment scam in Karnataka, the former CM said, “Lakhs of money spent to get PSI post. There is a situation where bribery is required everywhere.”
He said that common people’s money is being looted in Kerala.