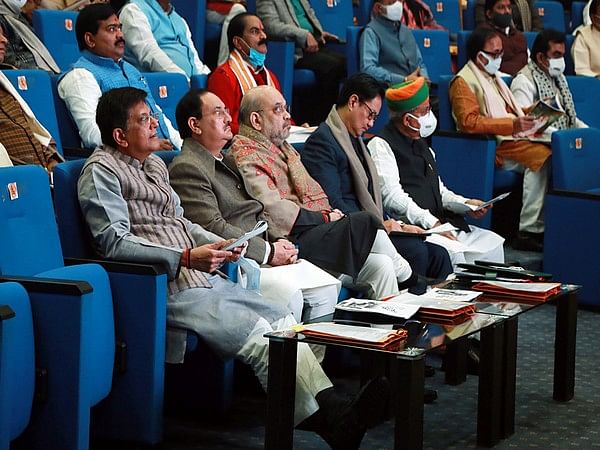 Union Ministers Rajnath Singh, Ashwini Vaishnaw, S Jaishankar, Anurag Thakur and Pralhad Joshi were among those who were seen arriving for the meeting at the Parliament Library building.

Rajnath Singh is chairing the meeting in which several BJP MPs are also present. Notably, the ongoing Monsoon Session is witnessing a number of adjournments in both Houses of Parliament on various issues ranging from price rise issues to the arrest of Shiv Sena MP Sanjay Raut by the Enforcement Directorate in a money laundering case.

Meanwhile, amid the continuous demand from the opposition, the Rajya Sabha will discuss the issue of price rise today. The government will also move ‘The Family Courts (Amendment) Bill, 2022’ for passing and consideration.

The opposition, Congress and other parties disrupted proceedings over the arrest of Shiv Sena MP Sanjay Raut and other issues.

Also, the Lok Sabha on Monday withdrew the suspension of four Congress MPs on the condition that they will not bring placards into the House.

Lok Sabha MPs, including Manickam Tagore, Ramya Haridas, Jothimani, and TN Prathapan, were suspended for the entire Monsoon Session on 25 July, for displaying placards and disrupting proceedings despite a warning by Speaker Om Birla.

The move had sparked protests and uproar from the Opposition party, with the Congress retorting that the Centre was trying to intimidate them.

Adding to this, MP Shashi Tharoor had said that the government is genuinely arrogant about its brute majority and seems contemptuous about the need to accommodate Opposition voices.

Also, Speaker Om Birla on Monday requested all parties to avoid bringing placards to the Parliament.