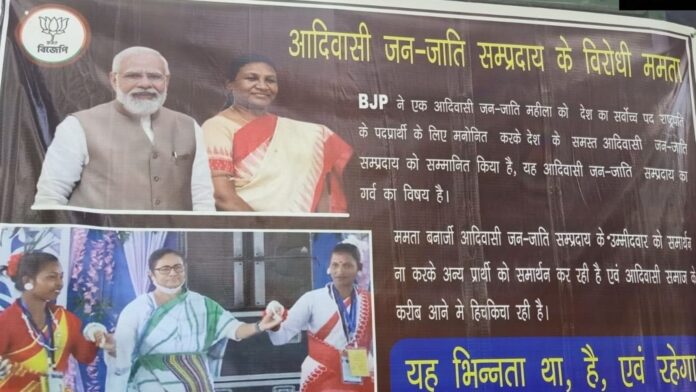 Murmu belongs to the tribal community.

The posters put up by BJP show Mamata Banerjee holding hands during a dance by members of the tribal community who are wearing gloves.

BJP leaders had accused the Chief Minister of insisting that ‘Janajatiya’ women wear gloves in an event in Alipurduar district “so that she could hold their hand and pose for a picture”.

West Bengal BJP president Sukanta Majumdar has urged the TMC MPs and MLAs to vote in favour of Murmu.

Murmu is a former Governor of Jharkhand and a former Odisha minister.

If elected, she will be the first tribal President of India and the country’s second female President. Born in a poor tribal family in the village of Mayurbhanj, a backward district in Odisha, Murmu completed her studies despite challenging circumstances.

Murmu is the first presidential candidate from Odisha of a major political party or alliance.
The counting of votes for the presidential election will take place on July 21.