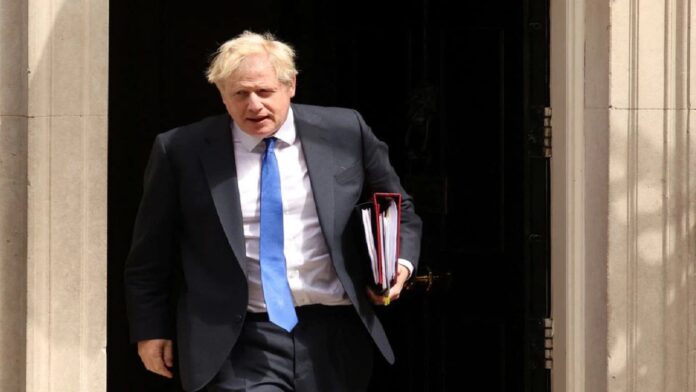 London [UK]: Following mass resignations by Cabinet members which started on Wednesday and on Thursday the numbers of resignations raised over 50 that compelled Boris Johnson to step down as British Prime Minister. He expressed his ‘regret’ at his inability to hold onto his position as Prime Minister while stressing that he is ‘immensely proud’ of his achievements in office.

“The process of choosing a new leader should begin now. And today I have appointed a cabinet to serve, as I will until a new leader is in place,” Johnson said during his address at 10 Downing Street in London. “It is clearly the will of the parliamentary Conservative party that there should be a new leader of that party, and therefore a new prime minister,” Johnson said.

He said, “I regret not being successful as I was not able to see through so many ideas and projects,” adding that he will continue to support the new leader as much as he can.
Almost 30 UK government officials, including key figures like UK Health Secretary Sajid Javid and Chancellor of the Exchequer Rishi Sunak, have already submitted their resignations over the recent scandal involving former deputy chief whip Christopher Pincher.

Earlier today, another minister of his government, Brandon Lewis resigned from his position, saying that he no longer believed the values of honesty, integrity and mutual respect are being upheld by Johnson’s government.

The British Foreign Secretary Liz Truss has also cut short her trip to a G20 meeting in Indonesia to return to London as she is widely seen as one of the potential contenders for the leader of the Conservative Party.

However, Johnson could continue to remain in office until October when the Conservative party meets for its annual conference so that his replacement is found.
Conventionally, when a Conservative leader resigns, they give the party time to hold a thorough leadership contest.