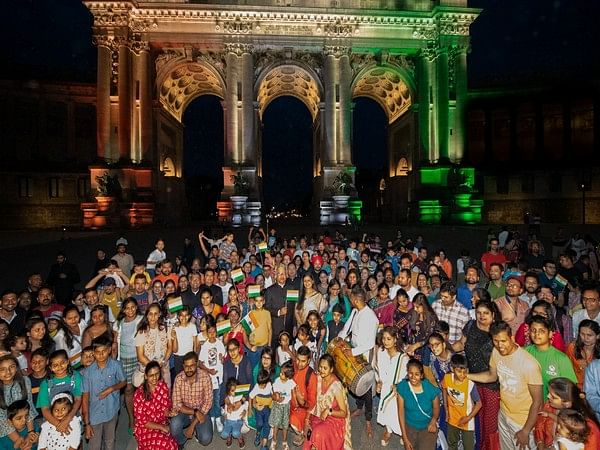 Brussels [Belgium]: In a gesture of friendship and goodwill, the city of Brussels in association with the Indian Embassy in Belgium came together to celebrate 75 years of India’s independence, popularly known as “Azadi Ka Amrit Mahotsav”.

This event also coincided with 75 years of India-Belgium diplomatic ties. The year 2022 marks a watershed moment for the bilateral relationship between India and Belgium.

Belgium was among the first European countries to establish diplomatic relations with independent India in September 1947. The close bilateral relationship is based on shared commonalities and commitment to the rule of law, democracy, federalism and pluralism.

In a first-of-its-kind event, the Federal Foreign Office, the city of Brussels and its associated agencies supported the initiative of the Embassy of India to illuminate the prestigious triumphal arch at the historic Parc du Cinquantenaire in tricolour lights.

This triumphal arch was built in 1880 to mark the 50th anniversary of Belgium’s independence. The triumphal arc at Parc du Cinquantenaire evokes the same reverence in the heart of Brussels that the Arc de Triomphe and the India Gate evoke in Paris and New Delhi respectively.

This iconic monument in Brussels, with three arches and a bronze quadriga at its summit, offers a stunning panoramic view of the capital and is a much-beloved tourist spot.

Needless to add that this gesture from the people and government of Belgium acknowledging the friendship and love for India through their iconic monument has delighted the Indian diaspora.