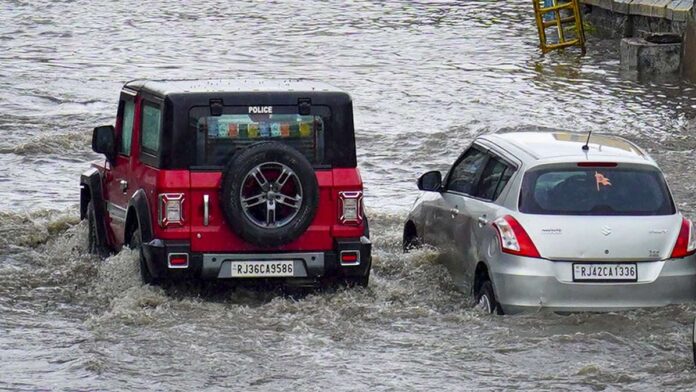 Jodhpur (Rajasthan): As heavy rains continued to lash several parts of Rajasthan triggering massive floods in the state, a viral video shows cars being washed away in Jodhpur.

A video clip showed a couple of cars in different locations across the city being flown away in flood waters gushing through the roads. The clip was from the night of July 25. In view of the prevailing situation, the Jodhpur district collector declared a holiday in schools on Tuesday.

Lok Sabha Speaker Om Birla informed that families of 5 people, including 4 children died due to heavy rains in Jodhpur and expressed condolences on the same.

“In Jodhpur (Rajasthan) due to heavy rains, the death of five people including four children is very sad. Praying to God to grant peace to the departed souls. My condolences to the bereaved families. Om Shanti,” tweeted Birla.

On Monday, the Indian Meteorological Department (IMD) said the western state is likely to receive intense rainfall over the next two days. According to IMD officials, a low-pressure area is lying over southwest Rajasthan and the neighbourhood and its associated cyclonic circulation is extending up to mid-tropospheric levels.

The IMD said a monsoon trough is likely to persist during the next two-three days and then shift northwards towards its normal position from July 27, for the subsequent 3-4 days.
According to the Indian Meteorological Department (IMD), Ajmer recorded the highest rainfall of 9 cm in the state during the last 24 hours that ended at 8.30 AM on Monday.

An increased rainfall activity is predicted in the northern part of India, particularly, with a low-pressure area being formed around South-West Rajasthan, this region and neighbouring areas are likely to receive heavy rainfall.