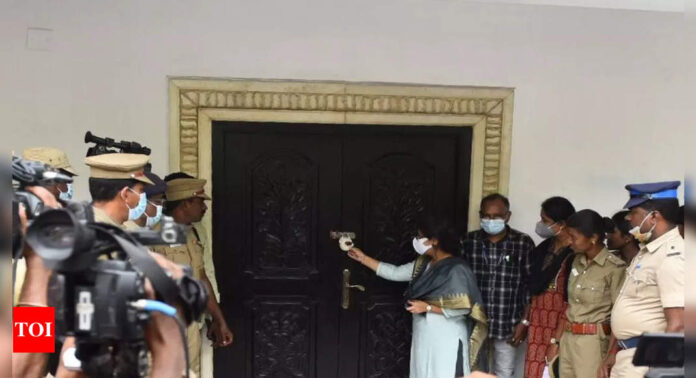 Chennai (Tamil Nadu): The Tamil Nadu government sealed the AIADMK party headquarters in Chennai following clashes between party members on Monday in the wake of the power struggle between former chief ministers Edappadi K Palaniswami and O Panneerselvam, resulting in the sealing of the party office by revenue officials.

“Due to the violence at AIADMK party office, RDO has sealed the party HQ. To avoid further law & order issues, either they or their advocates should be present before RDO office on July 25 to decide the control over party headquarter,” said Chennai Police. Edappadi K Palaniswami (EPS) was appointed the AIADMK interim general secretary on Monday.

A total of 16 resolutions were passed in the crucial All India Dravida Munnetra Kazhagam General Council meeting held on Monday in which Edappadi K Palaniswami was appointed as the party’s interim General Secretary and O Paneerselvam was expelled for “anti-party” activities.

Along with OPS, his supporters – JCD Prabhakar, R Vaithilingam and PH Manoj Pandian were also expelled from the AIADMK.

The resolutions were passed after the Madras High Court today dismissed a petition by OPS, who sought to stay the holding of a General Council (GC) meeting. He had contended that only the Coordinator and the Joint Coordinator can convene the GC meeting and that since the newly-appointed Presidium Chairman had done so, the meeting was technically illegal and hence untenable.

After the demise of Jayalalithaa in 2016, the party has been following a dual-leadership formula with EPS as co-coordinator and OPS as coordinator. The clamour has been growing louder for a single leader in the party since the district secretary meeting on June 14 this year.

Meanwhile ahead of today’s court’s ruling supporters of the EPS and OPS factions clashed on the streets of Chennai. Some people were injured in the clash.