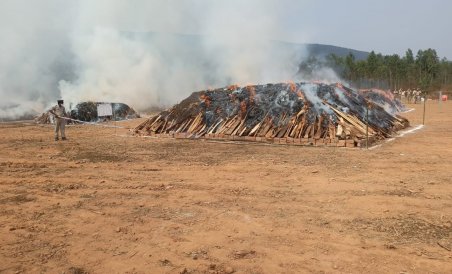 Bilaspur (Chhattisgarh): In a drug disposal drive, Bilaspur Police on Friday burnt 12.767 tons of ganja at a biomass plant in Chhattisgarh. Police said that around five MWs of electricity can be generated with the burning of ganja.

“Cough syrups, tablets and injections were crushed and buried in a pit. Around five MWs of electricity are generated with the burning of ganja,” Ratan Lal Dangi IGP, Bilaspur zone told media persons here.

In another incident, Chhattisgarh Police had arrested nine men for allegedly smuggling Ganja interstate and recovered 70 kgs of Ganja, valued at Rs 70 lakh in the international market from their possession in May this year, said the Surguja police.

In February this year, Kokrajhar Police organised a special program to destroy the seized drugs and psychotropic substances weighing 1477 kg Ganja and 1.28 Kg heroin along with 33 tablet packets.

The drugs destroyed by the police were seized in 2018 from different parts of the Kokrajhar district and set to fire in the presence of Special DGP L R Bishnoi, Superintendent of Police.

He also expressed his happiness over the public’s response to their work. He said, “We are receiving great response from the public and I believe that with the help of the public we can stop the spread of drugs and psychotropic substances.