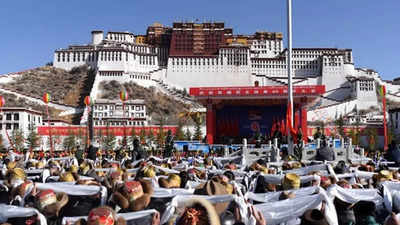 A notice on the palace’s Weixin social media site said the palace that was the traditional home of Tibet’s Buddhist leaders would be closed from Tuesday (Aug 9), with a reopening date to be announced later, Focus Taiwan reported.

Potala Palace is a popular tourist spot which has a major contribution to the economy of Tibet.

The action underscores China’s continued adherence to its “Zero-COVID” policy, mandating lockdowns, routine testing, quarantines and travel restrictions, even while most other countries have reopened.

While China claims that its hard-line “Zero-COVID” policy has been successful in preventing large-scale hospitalisations and deaths, critics including the World Health Organisation have decried its impact on the economy and society and said it is out of step with the changing nature of the virus and new methods of prevention and treatment.

Southwest China’s Xizang (Tibet) Autonomous Region reported 22 cases on Sunday, marking the end of the region’s 920-day record of no cases. The majority of those cases showed no symptoms.

The 22 cases are all related to Xizang’s Xigaze city, home to about 800,000 people. Eighteen cases were detected in Lhasa and nine of them took the same train from Xigaze to Lhasa on Thursday, Global Times reported.

Xigaze on Monday put the whole city under three-day static management, with nobody allowed to enter or leave the city.

Lhasa, the capital city of Xizang, announced to implement the “static management” in medium and high-risk areas, and cross-city travelling in low-risk areas will be required to present a 48-hour negative nucleic acid testing result, Global Times reported.

In Northwest China, a total of 274 cases were reported in the Xinjiang Uyghur Autonomous Region, affecting 12 counties and urban districts in seven prefectures and cities. Xinjiang region reported 69 new asymptomatic infections on Sunday, 59 of which were found in Yining, Ili Kazak Autonomous Prefecture.

Officials from the local health authority said that the Xinjiang region has been hit by multiple sporadic clusters of COVID-19 infections, and the current epidemic prevention and control situation is still grim.

According to data from the Xinjiang Uygur Autonomous Region’s Department of Culture and Tourism, the Xinjiang region has witnessed a surge in the number of tourists this summer.

The Gatherings of people and cross-regional movement may have potentially increased the transmission of the virus and the risk of its spread inside and outside Xinjiang, health authorities said.

Meanwhile, over 80,000 travellers are still stranded in Sanya city of Hainan province, which is the most desired tourist spot in China. Chinese officials told tourists not to leave the island on which Sanya is located till they consistently test negative for the virus.