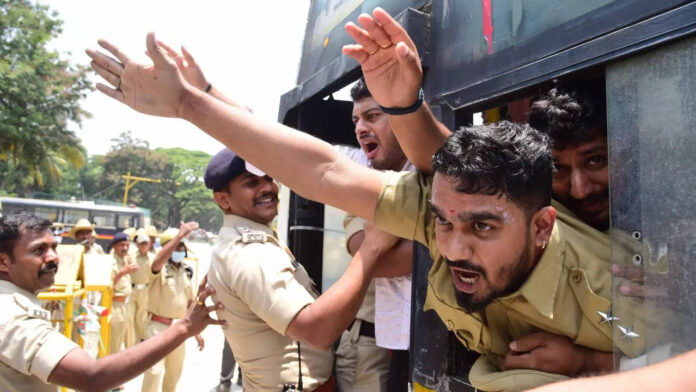 “CID police have arrested ADGP Amrit Paul in police sub-inspector (PSI) recruitment scam. Some evidence against him was found in the enquiry,” Karnataka Home Minister Araga Jnanendra told ANI on Monday. He further assured that anyone involved in the scam will not be spared.

Meanwhile, Chief Minister Basavaraj Bommai also assured that their government was dedicated to taking action against the persons guilty in the Police Sub-Inspector (PSI) recruitment scam, even if the accused belonged to their own “top officials”.

“We are committed to cleansing the entire system via an unbiased and uncompromising probe. CID has given a free hand to investigate the PSI recruitment scam. They have taken action on the basis of the evidence. Our government will act against the guilty even if it is our top officials,” Bommai said on the arrest of Additional Director General of Police (ADGP) Amrit Paul for his involvement in the PSI scam.

The PSI scam case is related to the irregularities in the appointment of police sub-inspectors in the state.

MLA and former Minister Priyank Kharge had earlier alleged a huge scam in the PSI recruitment of more than 545 candidates and pointed at the involvement of the governmnet and officials in the matter.

Notably, on May 12, Karnataka Minister for Higher Education CN Ashwath Narayan announced that the state government was investigating the PSI scam and had assured that the people involved with it would be exposed.

On April 29, the Karnataka government decided to cancel the results of the police sub-inspector (PSI) recruitment exam following allegations of corruption.

The government had stated that a fresh exam will be re-conducted and the dates for which will be announced soon.

Meanwhile, Jnanendra had informed that the Crime Investigation Team (CID) had arrested the main accused of the PSI scam, BJP leader Divya Hagaragi and four others in the case. Divya, who was absconding in the case, was arrested from Pune.