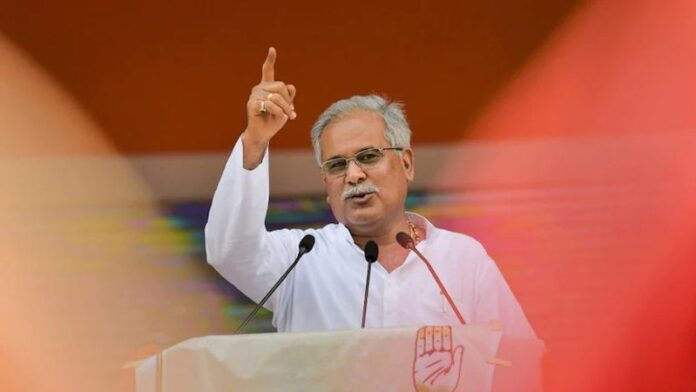 Raipur (Chhattisgarh): Chhattisgarh Chief Minister Bhupesh Baghel hit out at the Central government for its “dictatorial attitude” alleging misuse of central agencies to “suppress” the Opposition.

Speaking to reporters, Baghel said, “A dictatorial attitude has been adopted. We respect all the central agencies, but the way they are acting is unfortunate. It is being used to crush, suppress the opposition, it is not good for democracy.” The Chhattisgarh Chief Minister’s statement came amid Enforcement Directorate (ED) investigating the National Herald case.

ED had sealed the Young India office at the Herald House building in the national capital on Wednesday as no one was available in the office during the search because of which they were not able to complete the search.

Earlier reports said that the Herald House office was sealed.

The probe agency took action a day after the ED carried out raids at 12 locations in the national capital and at other places in connection with the National Herald case in which top Congress leaders were accused of violating norms.

Congress leader Mallikarjun Kharge, who was questioned by the ED on Thursday in the Herald case, alleged that the frequent raids by the Central agencies on Opposition leaders are an attempt by the government to eliminate the Opposition.

“If the government wanted non-involvement in such matters (money laundering), it should perform its job unbiasedly, but the way they are doing it so hurriedly implies that it is their attempt to defame and demoralise the Congress and eliminate the Bharatiya Janata Party’s Opposition,” he said when asked about the sealing of Young India office in the national capital.

Meanwhile, Congress MP Rahul Gandhi will address a press conference today at 9.30 am at All India Congress Committee (AICC) headquarters in the national capital.

The conference came ahead of the Congress’ massive nationwide protest on price rise and unemployment and the gherao of Prime Minister Narendra Modi’s residence against price rise, unemployment and GST hike on some essential items.