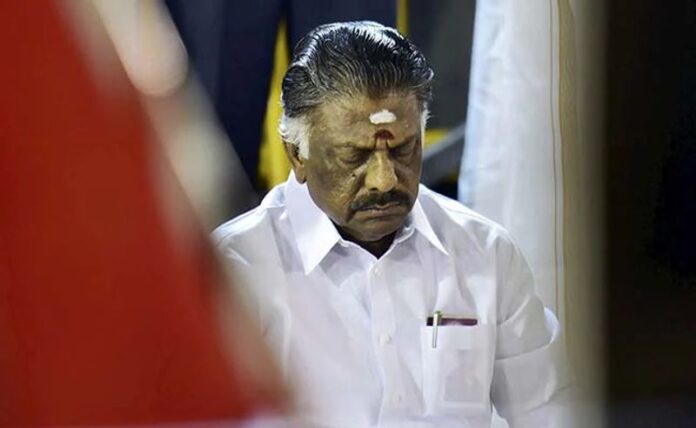 “In the last General Election 2019, OP Ravindranath won and that is the only seat where AIADMK won. Removing Theni Lok Sabha MP is a complete dictatorship,” said O Pannerselvam, Expelled AIADMK leader and father of OP Ravindranath. O Panneerselvam, met his supporters, at his residence in Chennai on Thursday.

The All India Anna Dravida Munnetra Kazhagam (AIADMK) interim general secretary Edappadi K Palaniswami on Thursday expelled 18 members of the party including the sons of O Panneerselvam from the primary membership.

All these 18 members are supporters of Panneerselvam. The two sons of OPS — O P Ravindhranath and V P Jayapradeep are Lok Sabha MP. The other heavyweight leaders who were sacked from the party include former minister Natarajan, Kolathur Krishnamoorthy and Marudhu Alaguraj.

Further, Sellur Raju, Shanmugam, Dhanapal, Rajendra Balaji, Kadambur Raju and six others were appointed as organizing secretaries for the party.

The leadership tussle between O Paneerselvam (OPS) and Edappadi K Palaniswami (EPS) was underway for a long. Now EPS will hold a meeting with party MLAs on July 17, according to the sources.

The meeting will be held at the residence of EPS on Chennai’s Greenways Road.
Notably, EPS was elected as the party’s interim General Secretary at its General Council meeting held on Monday after the nod by the Madras High Court.

Earlier, the Madras HC rejected a plea by OPS and allowed the general council meeting, which proposes to revive the interim general secretary post and abolish coordinator as well as joint coordinator posts to be held.

The HC order was passed at 9 am and the GC meeting was led by E Palaniswami at the party office in Vanagaram, which was chaired by the presidium chairman A Tamil Mahan Hussain.

The meeting passed as many as 16 resolutions, including one that squashed dual-leadership and created the post of deputy general secretary and to ensure electing a person for the post by the primary members of the party. The party election will be conducted in four months.

OPS supporter, Kolathur District Secretary, Krishnamurthy got hit by a stone thrown by EPS supporters at the party headquarters. The supporters of OPS and EPS also burnt posters and banners ahead of the meeting.

Meanwhile, a total of 16 resolutions were passed in the crucial AIADMK General Council meeting held on Monday in which Edappadi K Palaniswami was appointed as the party’s interim General Secretary and O Paneerselvam was expelled for “anti-party” activities.
Along with OPS, his supporters – JCD Prabhakar, R Vaithilingam and PH Manoj Pandian were also expelled from the AIADMK.

After the demise of Jayalalithaa in 2016, the party has been following a dual-leadership formula with EPS as co-coordinator and OPS as coordinator. The clamour has been growing louder for a single leader in the party since the district secretary meeting on June 14 this year.