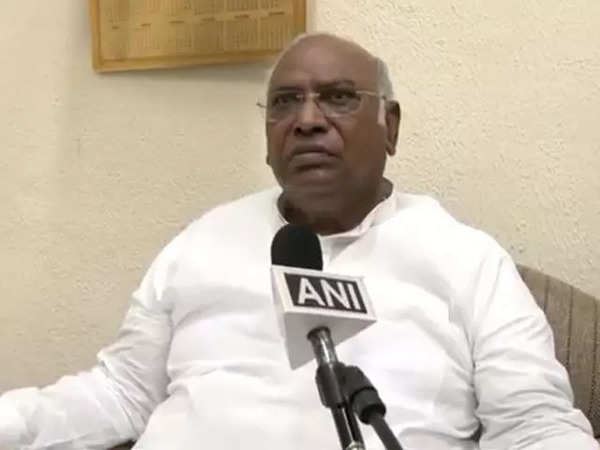 New Delhi [India]: Congress leader Mallikarjun Kharge on Thursday held the central government led by the BJP responsible for the ongoing political crisis in Maharashtra where around 40 Shiv Sena MLAs have revolted against the Maha Vikas Aghadi (MVA) government and are currently camping in Guwahati.

Kharge alleged that the BJP-led Centre is attempting to “destabilise” the “strong” Maha Vikas Aghadi government in view of the forthcoming presidential poll next month as they need numbers to get their presidential candidate Droupadi Murmu victorious in the poll slated to be held on July 18. “The MLAs were first taken to Surat where there is a BJP rule, then they were shifted to Guwahati. The BJP wants to destabilise the Maharashtra government. MVA is a strong government that the BJP is attempting to destabilise. The BJP wants that there should not be a single non-BJP government in this country,” Kharge alleged.

“The presidential poll is also forthcoming. They need the numbers also. So they want to topple the government before the presidential election. We can say that the Central government and the BJP are responsible for this. They want to gain power by destabilising the stable government in the state,” the Congress leader hit out at the BJP adding that they “did the same in the past too in Karnataka, MP and Goa”.

Meanwhile, the Eknath Shinde-led rebel faction of the Shiv Sena on Thursday released photographs of Sena MLA Nitin Deshmukh who returned to Maharashtra a day ago and alleged that he was forcibly taken to Surat in Gujarat.

Addressing a press conference here, Deshmukh alleged that he was taken to Surat and when he realised the conspiracy against the Maha Vikas Aghadi government he tried to run away but was caught by Surat Police.

“We were forcibly taken to Surat, I tried to run away but was caught by Surat police. Despite having no complications, doctors told me that I had a heart attack. 300-350 police personnel were keeping an eye on us,” he alleged.

“Before me, MLA Prakash Abitkar tried to get away from them but he could not. We got to know about the conspiracy against the MVA government as soon as we reached Surat hotel,” Deshmukh said.

Soon after, the Eknath Shinde camp released pictures of Nitin Deshmukh with other rebel MLAs.

Notably, a total of 42 Maharashtra MLAs are present with Shinde while only 13 are with Maharashtra CM Uddhav Thackeray and Shiv Sena.

Shiv Sena leader Sanjay Raut said earlier today that his party is ready to exit the Maha Vikas Aghadi government if the rebel MLAs are willing. After this, Congress has called a meeting of its leaders today.

“MLAs should not communicate from Guwahati, they should come back to Mumbai and discuss all this with CM. We are ready to consider exiting out of MVA if this is the will of all MLAs, but for that, they have to come here and discuss it with the Chief Minister Uddhav Thackeray, ” Raut said.

According to sources, Congress is unhappy with the statement of Shiv Sena leader and has convened a meeting at the Sahyadri guest house in this regard. Senior Congress leaders including HK Patil, Balasaheb Thorat, Nana Patole and Ashok Chavan are participating in the meeting.