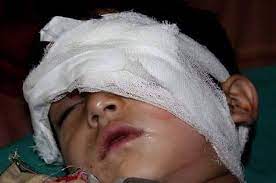 Udhampur (Jammu and Kashmir): Besides safeguarding the public and maintaining law and order in Jammu and Kashmir, the CRPF personnel now and again have come forward to help the deprived.

Kewal Kumar’s son Sanjit Kumar, a resident of Nagulta, Gharian Kalan, belongs to an extremely poor family and is suffering from a rare eye disease.

His father appealed to help him and his son financially so, the Battalion contributed Rs 31,000 for the treatment of son.

Om Parkash Singh, Deputy Commandant of CRPF 187th Bn said, “he got information from Sarpanch Panchayat Halqa Basht that a parent of six years old child needs financial help for the treatment of his son who is suffering from a rare eye disease.”

He added that “I informed same to the Battalion, so that if anyone wants to help the child so, they can help him so we collected 31,000 and in the presence of Sarpanch of Panchayat Halqa Basht, Surinder Singh, we handover Cheque of the same Amount to the family of the Kid so that they Provide treatment to his son.”

Shreyas Talpade’s ‘Kaun Pravin Tambe?’ to be released on April 1

Juventus’ Weston McKennie ruled out for rest of season