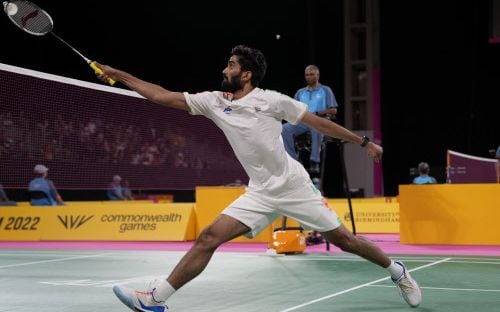 Birmingham [UK]: Indian badminton team scored another victory in the group match of the Commonwealth Games 2022 by thrashing Australia 4-1 in their mixed team event to enter the quarter-final on Saturday.

Srikanth Kidambi draws first blood against Ying Xiang Lin of Australia as he clinched the opening game of the fixture by 21-14. In the second game, Kidambi continued his winning form and clinched the game by the score line of 21-14, 21-13. In the next match of the fixture, double Olympics medallist PV Sindhu defeated Australia’s Wendy Chen in straight games by 21-10, 21-12. India go 2-0 up in the mixed team events.

The third match of the fixture saw the Indian duo of Sumeeth Reddy and Chirag Shetty defeat Australian pair Jack Yu and Tran Hoang Pham in straight sets 21-16, 21-19. The Indian duo gave India an unassailable 3-0 lead against Australia in the mixed team event.

In the fourth match of the tie, the Indian duo of Treesa Jolly and Gayatri Gopichand suffer defeat against Hsuan-Yu Wendy Chen and Gronya Somerville by 13-21, 19-21.

Sumeeth Reddy and Ashwini Ponnappa beat Ying Xiang Lin and Gronya Somerville of Australia 21-14, 21-11 in the mixed doubles to hand India a 4-1 win in the tie.