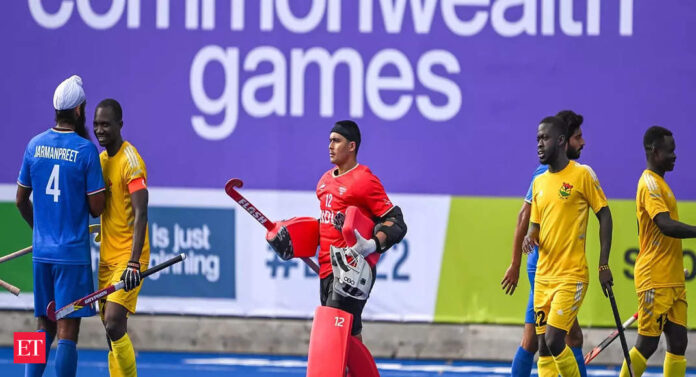 Birmingham [UK]: The Indian Men’s Hockey team got off to a rollicking start with a dominant 11-0 win over Ghana in their opening match of the Birmingham 2022 Commonwealth Games here on Sunday.

An attacking start to the match saw India taking the lead in the second minute of the match through Abhishek, who scored from the rebound off the Ghana goalkeeper’s pads after Harmanpreet had taken a shot from the Penalty corner. Ghana, on the other hand, responded quickly and earned themselves a Penalty Corner in the third minute, but the Indian defence was successful in averting the danger. The Indians continued to put pressure on Ghana’s defence and went on to score two more goals in the first quarter.

It was Harmanpreet who scored the second goal from the Penalty Corner in the 10th minute, while the third goal of the match was scored by Shamsher in the 14th minute. A beautiful move created by Abhishek from the left flank allowed Shamsher to calmly slot the ball home to make the scoreline 3-0 at the end of the first quarter.

The Indians looked more dangerous in the second quarter, with the forward line piling pressure on Ghana’s defence. They earned a PC in the 19th minute, but Varun Kumar missed out on converting it. A minute later, India went on to extend their lead to 4-0, courtesy of Akashdeep’s fiery tomahawk shot.

Young drag-flicker Jugraj got on the scoresheet as he converted the Penalty Stroke to make the scoreline 5-0 in the 22nd minute. A rare attacking move from Ghana helped them earn back-to-back Penalty Corners in the 25th minute, but they missed out on converting their chances.

Regaining some strength, Ghana started the second half brightly as they immediately earned a Penalty Corner. However, a good video referral by India ensured Ghana were denied the short corner. Minutes later, India won yet another Penalty corner, but Ghana goalkeeper Duisberg Offei made an acrobatic save to deny the Indians from scoring.

India continued their relentless attack as they scored as many as four goals in the last 10 minutes of the third quarter. After Harmanpreet’s second PC conversion in the 35th minute, Nilakanta (38′) and Varun (39′) also joined the party. Meanwhile, Jugraj converted the PC to add the ninth goal to the tally at the end of the third quarter.

In the final quarter, India continued their onslaught by making dangerous penetrating runs inside Ghana’s circle. Experienced forward Manpdeep got on the scoresheet as he scored India’s 10th goal in the 48th minute. Minutes later, Harmanpreet completed his hat-trick as he successfully converted a PC to take India’s lead to 11-0.

In the dying minutes, Ghana got a chance to score their first goal, but India averted the danger. The Indians kept most of the ball possession in the final minutes of the match and ensured that they keep a clean sheet.