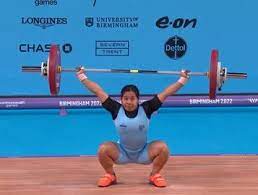 Birmingham [UK]: Indian weightlifter Bindyarani Devi won a silver medal with a combined lift of 202kg in the Women’s 55kg final at the ongoing Commonwealth Games 2022 in Birmingham on Saturday.

Bindyarani Devi successfully lifted 81kg in her first snatch attempt in the women’s 55kg category. In her second attempt, Bindyarani lifted 84kg without breaking a sweat. In her final snatch category attempt, Bindyarani nailed the 86kg snatch in her third attempt. In the Clean and Jerk lift category, she lifted 110kg in her first attempt. In her second attempt for 114kg, she failed to lift it. In her final attempt of category 116kg, she lifted it with ease to claim the silver medal for India and fourth overall.

The Indian weightlifter set a Commonwealth Games record with her final clean and jerk lift in the women’s 55kg category.

Nigeria’s Adijat Adenike Olarinoye won the gold medal with a combined lift of 203kg, one more than Bindyarani Devi.

Earlier in the day, Saikhom Mirabai Chanu won a gold medal with a combined lift of 201kg in the Women’s 49kg final at the ongoing Commonwealth Games 2022 in Birmingham.

Mirabai added one more gem to her crown and took home the gold as she added another medal to India’s tally on day 2 of the CWG with a total of 201kg.