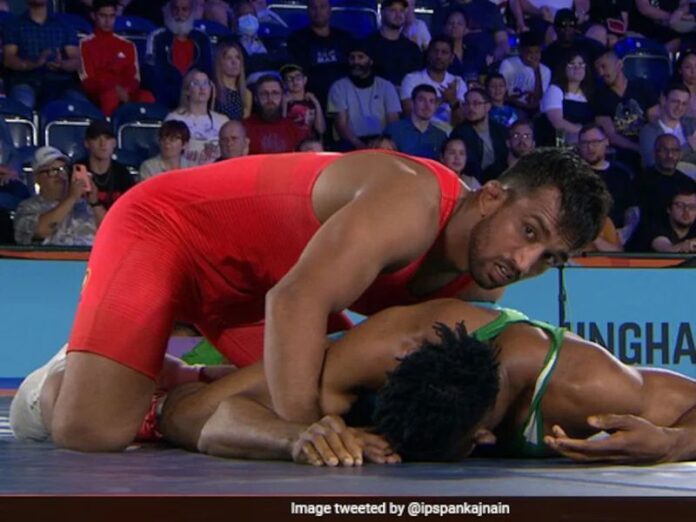 He defeated Muhammad Sharif Tahir at the Coventry Arena Wrestling Mat B on Saturday. Naveen sealed 9-0 victory by points against Tahir in the gold medal match and clinched India’s third gold of the day at the CWG.

In the final three minutes, Naveen managed to hold his ground with a powerful grip on his opponent, pinning and rolling the Pakistani wrestler in the ring to walk away with a gold medal.

Earlier in the day, Indian grappler Pooja Gehlot won the bronze medal in the Women’s Freestyle 50 kg category. She defeated Christine Lemofack Letchidjio of Scotland at the Coventry Arena Wrestling Mat B on Saturday.

Ravi Dahiya bagged gold, his maiden at the CWG, in the men’s freestyle 57kg category in wrestling.

Dahiya sealed a 10-0 victory by technical superiority against Ebikewenimo Welson in the gold medal match.

Vinesh Phogat won the gold medal in the women’s freestyle 53kg category after defeating Chamodya Keshani Maduravalage of Sri Lanka. The match lasted for two minutes and 24 seconds as Phogat sealed the victory by fall.