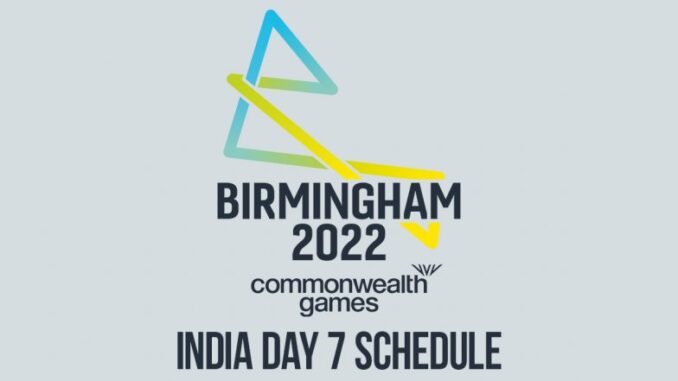 New Delhi [India]: After yet another action-filled day of Commonwealth Games 2022 in Birmingham which saw India capture more medals in Weightlifting, Squash and Judo, the nation’s contingent will be looking forward to progress well in sports like Athletics, Hockey, Boxing, Table Tennis etc.

Action will start with Table Tennis from 2:00 PM onwards. The mixed doubles round of 64 match between India’s Sanil Shetty and Reeth Tennison and Malaysia will kickstart India’s day seven.

From 2:30 PM onwards, India’s athletics contingent will resume their campaign.

Sarita Romit Singh and Manju Bala will be participating in the Group A qualification round of Hammer Throw.

Bhavani’s campaign is off to a good start with two straight wins and road to the semis will be easier for her.

But for Baby Sahana, two straight losses in start have made things tough for her and a win would be must.

Action will then shift to Lawn Bowls from 4:00 PM onwards, with Mridul Borgohain set to continue his campaign against Ross Davis of Jersey.

Mridul had registered a win against Iain McClean of Scotland in his previous match and another win will make the road to the quarterfinals smoother for him.

The road to the semis will be easier for Sonalben if she wins her match as she has won the previous two matches.

From 4:30 PM onwards, Rhythmic Gymnastics will start with Individual Qualification Sub Division 1 event. India’s Bavleen Kaur will be a part of it.

Boxing quarterfinals in the Over 48-51 kg category between Amit Panghal and Lennon Mulligan of Scotland will start from 4:45 PM onwards.

Racquet sports will dominate the screen from 5:30 PM onwards with Sunayana Kuruvilla and Anahat Singh squaring off in their Squash women’s doubles round of 32 match.

Also, men’s singles (Class 3-5, Group 2) player Raj Alagar will be in action against Dan Bullen of England at the same time.

From 6:00 PM onwards in the Squash courts, the men’s doubles round of 32 match between India’s Senthilkumar Velavan and Abhay Singh and the British Virgin Islands will take place.

The Boxing ring will have the focus from 6:15 PM onwards again as India’s Jaismine Lamboria will be fighting Troy Garton of New Zealand in over 67-60 kg quarterfinals.

Men’s Hockey Team will be looking forward to add another win to their tally after a win over Canada when they take on Wales from 6:30 PM onwards. This will boost their semifinal chances.

From 7:00 PM onwards, India’s squash players Dipika Pallikal and Saurav Ghosal will be in action in their mixed doubles round of 16 match.

Boxer Sagar Ahlawat will be in action against Seychelles’ Keddy Evans Agnes from 8:00 PM onwards.

Table Tennis mixed doubles and singles action will start from 8:30 PM onwards, with Sathiya Gnanasekaran/Manika Batra, Achanta Sharath Kamal/Sreeja Akula in action in round of 32 matches in mixed doubles.

Reeth Tennison, Sreeja Akula and Manika Batra will be playing their solo round of 32 matches as well.

In men’s doubles category round of 32, duos of Harmeet Desai/Sanil Shetty and Achanta Sharath Kamal and Sathiyan Gnanasekaran in action against Cyprus and Guyana respectively.

From 11:00 PM onwards, Squash mixed doubles duo of Joshna Chinappa and Harinder Sandhu will be in action in their round of 16 match.

From 12:12 AM, Murali Sreeshankar and Muhammed Anees will represent India in the long jump final.

12:30 AM onwards, boxer Rohit Tokas will take on Xavier Ikinofo of Niue in Over 63.5-67 kg quarterfinals.

While in Squash, women’s doubles duo of Joshna Chinappa and Dipika Pallikal will be in action.