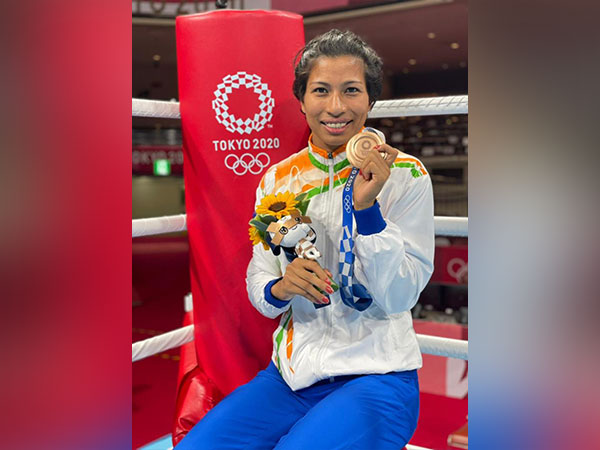 New Delhi [India]: After Tokyo Olympic medallist Lovlina Borgohain said on Monday that she was facing harassment due to her coach not getting entry into CWG village, the Union Sports minister Anurag Thakur has asked officials to be in touch with Indian Olympic Association (IOA) and resolve the issue as soon as possible.

“Union Sports Minister Anurag Thakur is looking into the matter of Lovlina Borgohain and has directed the ministry officials to be in touch with Indian Olympic Association (IOA) and resolve the issue as soon as possible,” a source told. The Boxing Federation of India also issued a statement and said the IOA understood BFI’s point of view and therefore, extended help with maximum possible additional support staff.

“Only 33 per cent of the playing contingent is allowed as Support Staff which in BFI’s case for the 12 boxers (8 men and 4 women) stands to be 4 support staff, (including coaches) who were to travel with the team to Birmingham,” the statement said.

“The IOA understood BFI’s point of view and therefore, extended help with maximum possible additional support staff. With IOA’s help, the number of support staff went up from 4 to 8 for the entire contingent of 12 boxers. Boxing Federation of India ensured that Sandhya Gurung was at the training camp in Ireland. BFI is closely working with IOA so that Sandhya Gurung could be a part of the team in Birmingham. In the meanwhile, delegate transport and accommodation at ETO’s hotel have been already provided to her,” it added.

Lovlina took to social media and said she was facing a lot of problems in her training as coaches who helped her secure a medal in the Olympics are being removed again and again.

She will be representing India in the 70kg category at the Commonwealth Games 2022, which will start from July 28.

“Today with great sorrow I want to confess that I am facing a lot of harassment. The coaches who helped me secure a medal in the Olympics are being removed again and again, affecting my training and competition preparation. One of the coaches is Sandhya Gurungji and she is a Dronacharya awardee. Both of my coaches have to plead to be included in the training camp and they are added quite late,” she said in a tweet.

“This has caused me a lot of problems in my training and this causes mental harassment as well. Right now, my coach Sandhya Gurungji is not getting entry into the Commonwealth Village and she is outside. Due to this, my training has stopped eight days ahead of the competition. My second coach has also been sent back to India,” she added.

Lovlina said she is keen to earn laurels for the country.

“I do not know how to focus on the Games in this situation. Due to this, my last world championships were also ruined. But I do not want to ruin my CWG campaign because of this politics. I hope that I can break this politics and win a medal for my country,” she said.

The Birmingham Commonwealth Games are being held from July 28 to August 8.