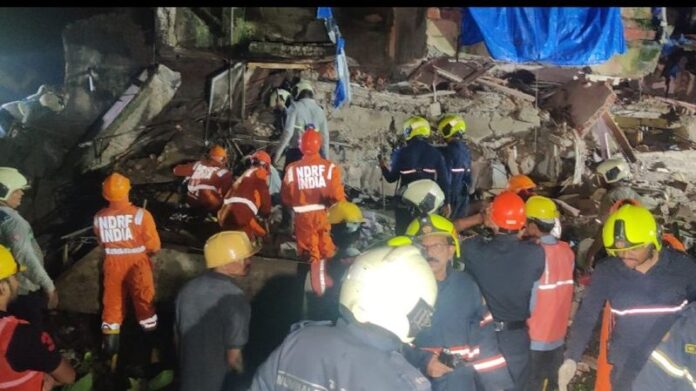 Kurla (Mumbai) [India]: The Mumbai Police on Wednesday said that a total of 19 people were killed and 15 people sustained injuries after a building collapse in Kurla area of Mumbai on Monday.

An FIR has been registered against other landlords and one Dilip Biswas under Sections 304(2), 308, 337, 338, and 34 of IPC. Prime Minister Narendra Modi on Tuesday expressed grief over the incident and announced an ex-gratia of Rs 2 lakh each from the Prime Minister’s National Relief Fund (PMNRF) for the next of kin of those who lost their lives. The injured would be given Rs 50,000 each.

“Pained by the building collapse in Mumbai. In this sad hour, my thoughts are with the bereaved families and prayers with the injured. An ex-gratia of Rs. 2 lakh each from PMNRF would be given to the next of kin of the deceased. The injured would be given Rs. 50,000,” tweeted the Office of the Prime Minister quoting PM Modi.

The death toll in the Kurla building collapse rose to 19 on Tuesday evening.
Maharashtra Chief Minister Uddhav Thackeray announced a compensation of Rs 5 lakh each to the families of those who died in the incident.

The four-storeyed building collapsed in Mumbai’s Kurla late on Monday night. The incident took place in the Naik Nagar area.

Meanwhile, Shiv Sena MLA Sanjay Potnis said, “In 2016, the building was listed under the C1 category. Later, following an audit, it was reclassified under C2. It should have been repaired, but it wasn’t. I, however, don’t think there has been negligence on part of BMC.”

Earlier, Brihanmumbai Municipal Corporation (BMC) Additional Commissioner Ashwini Bhide said the collapsed building was dilapidated, since 2013, notices had been first given for its repair, and then for its demolition.

On Monday night, Minister Aaditya Thackeray visited Kurla where the building collapsed and said that such property should be vacated on the notice of Brihanmumbai Municipal Corporation (BMC).”

Whenever BMC issues notices, (buildings) should be vacated themselves…otherwise, such incidents happen, which is unfortunate…It’s now important to take action on this,” Thackeray said.